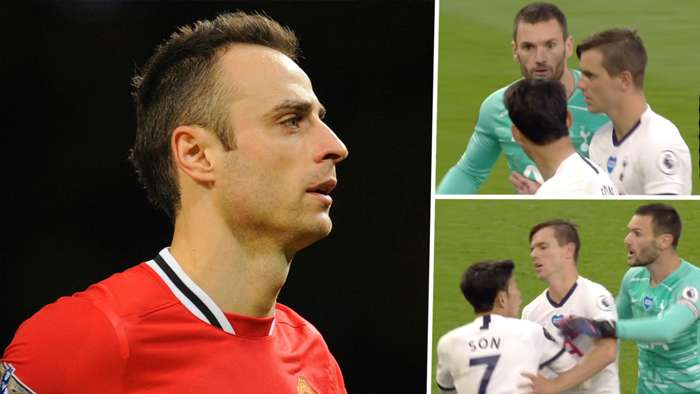 Dimitar Berbatov has revealed that he was pleased to see Tottenham players involved in a half-time, on-field spat during their Premier League clash with Everton.

Hugo Lloris raced over to remonstrate with team-mate Heung-Min Son during Monday's meeting at the Tottenham Hotspur Stadium, despite the hosts holding a 1-0 advantage at the time.

The Spurs skipper explained afterwards that he confronted the South Korea international over his lack of pressing of the opposition, adding that there was no issue between the pair and that all had been resolved.

Indeed, Jose Mourinho admitted it was "beautiful" to see the two players showing passion for the cause, with Berbatov claiming that he wants to see more incidents like that from the north Londoners.

He told Betfair: "To be honest I was happy with the Spursresult against Everton, sometimes you just need grit to progress. When I was at United and we became champions, we won most games 1-0 consistently, it's the most important result in football. Three points equal three points, no matter how you get them.

"Son and Lloris' bust up was nothing, the desire to be a winner is always high and we should see this more often from Spurs players, it shows you care, you want to win, and you have the fire to do it.

"If players aren't doing their job, they need to let each other know, even if they fight a little bit. In a way, Mourinho is right, and it was a beautiful thing to see. The only issue is that we, the fans, also saw it, and maybe it would have been better in the dressing room, but overall it's good to see the fire there.

"There were many fiery players when I was playing, everyone wanted to win. If the ref was a coach, you could bust up with them, with other players, there were fights often broken up.

"It was like this a lot at United, when Nemanja Vidic was kicking someone and didn’t care, you would argue and fight, but afterwards you know it's OK. We all wanted to win, and we knew that of each other.

"If I did something wrong, Giggsy would tell me, and I would say to myself 'come on now'. Patrice Evra was in a bust up a few times, Vidic also, it was mostly defenders as they're the tough ones.

"I don't remember the last time Spurs did that, they have been very controlled with no anger. It was a pleasant surprise, I was like 'f*ckingfinally', he is captain and that is his job to let them know to be better.

"Again, maybe wait for the dressing room, but in that moment it can be an uncontrollable impulse. it was passionate, it was necessary, and when it comes from your captain you take it on the chin and do better next time."