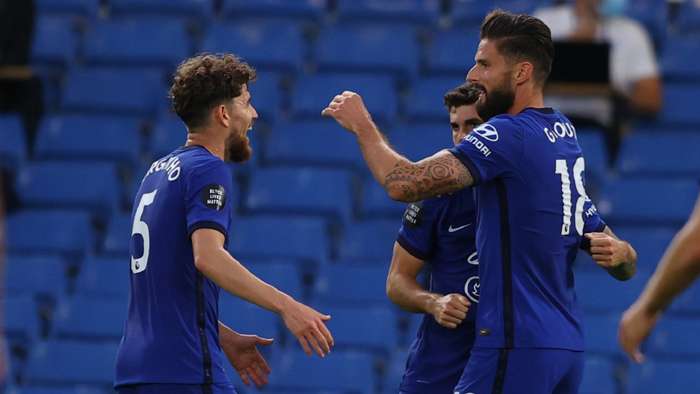 Olivier Giroud has revealed why his pen and pad celebration in Chelsea's win against Norwich was dedicated to injury absentee N'Golo Kante.

Frank Lampard's men needed three pointsto tighten their grip on third place after a disappointing 3-0 defeat at Sheffield United last time out, and Giroud ended up being the match-winner when he found the net just before half-time.

The French striker headeda beautifully flighted Christian Pulisic cross past sprawling Norwich goalkeeper Tim Krul, before wheeling away to celebrate with his team-mates.

Giroud then turned to face Kante, who was sitting in the stands while he continues to recover from a hamstring issue, and appeared to use an imaginary notepad and pen to write a message to his fellow countryman.

Whenasked about the gesture during a post-match interview with Sky Sports, the Chelsea frontman responded:"It's just I play Scrabble with N'Golo Kante and I aimed it at him. That's it!"

Giroud added on the Blues' latest performance:"We really wanted to bounce back, we played a good in team in Sheffield United and they played well, so efficient in front of the goal.

"The focus and determination today was high, the cohesion was good.

"The most important thing was three points to be honest with you and we're relieved now."

Lampard singled Giroud out for praise after the final whistle, highlighting the33-year-old's unique attributesin and around the penalty area.

"He is always going to give you a desire to get in there for the team,"the Chelsea boss told reporters.

"He has scored important goals. He has never given me a problem, always trained well. His professionalism is always good."

The Blues will now start preparing for an FA Cup semi-final showdown against Manchester United on Sunday, which comes just three days before a meeting with newly-crowned Premier League champions Liverpool.