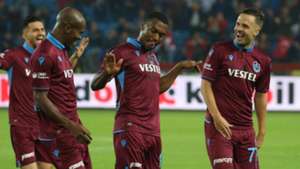 Daniel Sturridge's contract with Trabzonspor has been terminated by mutual consent, the club announced on Monday morning.

Sturridge left Liverpool at the end of the 2018-19 campaign following the expiration of his final contract at Anfield, bringing to an end his six-year stay on Merseyside.

Trabzonspor snapped up the 30-year-old on a free transfer back in August, tying the ex-England international down to a two-year deal at the Senol Gunes Stadium, but he has since been unable to hold down a regular place in the first team.

Sturridge only managed to rack up 15 appearances across all competitions for Trabzonspor in total, scoring seven goals.

The fitness issues which have plagued the mercurial striker's career have persisted in Turkey, and he is now on the lookout for a new club once again.

He was left out of Trabzonspor's matchday squad during a 5-2 home win over Rizespor on Sunday, despite starting a 2-2 draw against Besiktas the previous week.

Trabzonspor have released an official statement confirming Sturridge's departure, which reads: "The contract signed between our company and our professional footballer, Daniel Andre Sturridge, dated August 21, 2019 and ending May 31, 2021 has been mutually terminated.

"In accordance with the termination agreement, Sturridge has given up on his money owed for the remainder of his contract which was effective from August 2019 through May 31, 2021."

Sturridge was heavily linked with a return to the Premier League during the January transfer window, having been touted as a potential replacement for the injured Wesley at Aston Villa .

He has also been tipped to undertake a new challenge in the MLS on several occasions, with DC United mooted as a possible landing spot.

Sturridge began his career at Manchester City, where he spent three years before completing a move to Chelsea.

The forward played for the Blues between 2009 and 2013, but was restricted to a bit-part role and sent out on loan to Bolton Wanderers for half a season.

Chelsea eventually sold Sturridge to Liverpool, where he formed one-third of a fearsome triumvirate alongside Luis Suarez and Raheem Sterling for a time, before being cut down by injury.