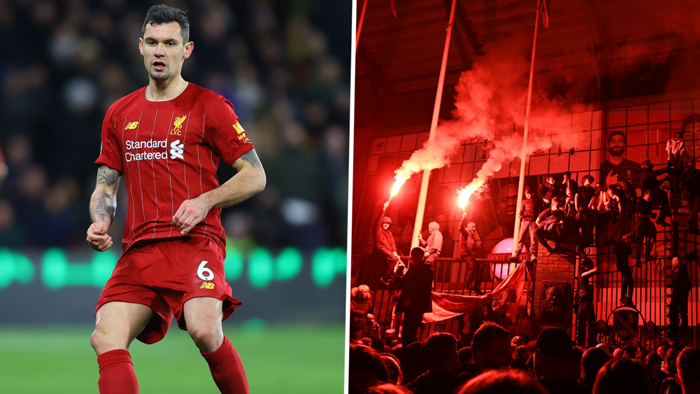 Former Liverpool defender Dejan Lovren has revealed that he snuck out of the team hotel to celebrate with supporters outside of Anfield after his side clinched the Premier League title.

The Reds clinched their first Premier League crown in JuneafterManchester City's 2-1 loss atChelsea gave Lovren and Co. an unassailable lead atop the table.

With seven games remaining, it was the earliest any side had ever won the Premier League title.

Following Chelsea's win, Liverpool held a party at their team hotel that lasted until around midnight. Despite team rules forbidding players from joining fans celebrating outside their home ground, Lovren was in the mood to keep the party going.

"I did something that I don't know if anybody knows about. Youare the first person that knows,"Lovren toldSport 24.

"After the game, a lot of all the fans went to the stadium, it was a big party.

"They told us, 'Guys don't even go to the stadiumbecause you will have problems, we can't keep you safe.'

"I said to myself, the party was almost over, 'I don't want to go to sleep, it's too early, at midnight' and I said to myself,'I willtake the car and go to Anfield, just to experience this.'

"I drove myself there, I have a video, I put the mask on and I went there. My god, tens of thousands of people celebrating and I just wanted to feel this emotion because wedidn'thave a good celebration in the stadium —it was empty.

"I needed to do it and I was really happy that I did it. It was a good experience."

When asked if anybody recognised him, Lovren said: "Maybe three peoplebecause I put my mask down to see my phone. In this second like four of them saw me but it was really good.

"I was alone, nobody else. I said to Adrian I was going and he said, 'Noyou're not going, you're lying'. I went and sent him some videos, he was like, 'No chance you did that.' He was so surprised."

After Liverpool's season came to a close, the 31-year-old Croatianleft Liverpool to joinRussian outfit Zenitfor a fee in the region of €12 million (£11m/$14m).