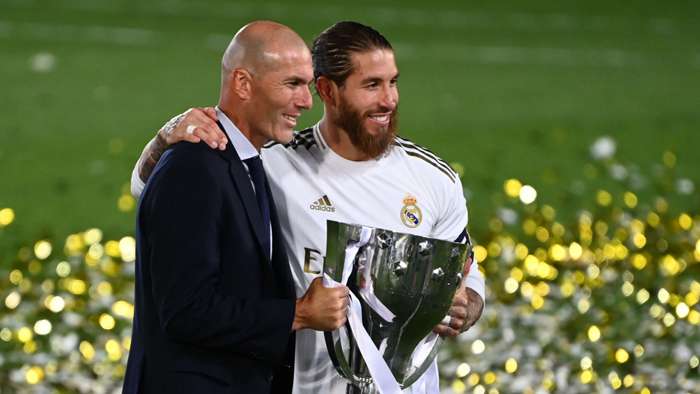 Karim Benzema opened the scoring for the hosts, as he produced a cool finish in the box after being played in by Luka Modric on the half-hour mark.

The Blancos were made to wait for their second goal of the night, which came when Ramos won a penalty in the 77th minute.

The Madrid captain stepped up to take the penalty, but he chose to lay the ball off to Benzema to score his second, only for the referee to pull play back and demand a retake.

Benzema stepped up from the spot the second time around and found the net for his 21st La Liga goal of the season, which proved to be the winner.

Villarreal got on the scoresheet late on through Vicente Iborra, but Madrid held on for a 2-1 victory to wrestle the domestic crown back from arch-rivals Barcelona - who were beaten 2-1 by Osasuna at Camp Nou.

Ramos paid tribute to Zidane in his post-match interview with La Liga TV , while expressing his hope that the 48-year-old remains in charge for years to come.

"Everything Zidane touches turns into gold," said the Madrid defender. "We believe in him and in his work. He's the one who has to make the difference, he's a person who trusts players, and few do.

"We hope he stays here for a very long time, he is unique."

Ramos went on to insist that Madrid have fully deserved their success in 2019-20, dismissing critics who have pointed to their luck with VAR decisions since the resumption of the campaign last month.

He said: "The title is a reward for work, consistency and balance. What we have done has great value, despite what they may say.

“Work, when you do it right, is rewarded.There is a lot of merit in winning these 10 games in a row.

“It was an atypical season, we had to win everything, we did not depend on ourselves at the start.The margin of error did not exist in our heads and we have shown it.

"These matches cannot be won comfortably.We have 34 Ligas and this is my fifth with Real Madrid, I am very happy."

Ramos added on his own future at the Bernabeu after entering the final year of his current contract:"Whatever the president wants, I would be delighted, I would like to end my career here.