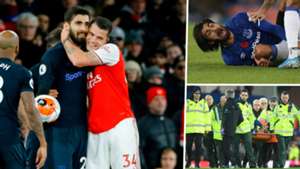 Andre Gomes says the quick-thinking of the Everton doctor contributed to the midfielder's rapid recovery from a serious ankle injury.

Gomes made a shock return to action as a second-half substitute against Arsenal last weekend, just 112 days after suffering a fractured ankle against Tottenham at the start of November.

At the time it was feared the Portugal international would be sidelined for several months and may not even feature again this campaign.

However, the 26-year-old was able to begin his rehabilitation programme within a few weeks and returned to training with his Everton teammates by the end of January.

Gomes has now revealed that the actions of Everton doctor John Hollingsworth in the immediate aftermath of his injury played a key role in his recovery.

Doctor Hollingsworth reset Gomes' ankle on the pitch rather than waiting until he got to hospital, which minimised any damage and meant he was able to undergo surgery the following day.

"I knew that he wanted to put my foot in the right place. Obviously I had adrenaline, I was upset, but I knew what was supposed to [happen] with these types of injuries, or at least [to act] as fast as you can.

"The doctor, he put my foot in the right place so it was really easy to mobilise my ankle and go to the hospital. It was really massive work, great.

"And maybe that helped a lot on my recovery and maybe to be able to have surgery straight away the next day.

"Basically, the doc did a brilliant job. I was feeling everything in that moment [on the pitch] - I was aware of it and, for me, it was much better to have the help of the doctor in that moment than maybe 10, 20 or 30 minutes after."

Toffees boss Carlo Ancelotti said Gomes was fit and ready to start at Arsenal last weekend, though he eventually opted to name him among the substitutes.

After impressing off the bench and coming through another week of training unscathed, the midfielder is in contention to start against Manchester United at Goodison Park on Sunday.

Gomes is impressed with the impact Ancelotti has made since arriving at the club and says he will follow the Italian's advice regarding his selection.

"If I feel good and the manager wants me to start then I will say 'yes' but we go day-by-day and decide at the end of the week," Gomes added.

"Carlo has a lot of experience as a football player and a manager, everybody respects him and he's a really smart guy, and he's helping us.

"We've had really good results in the last two months and he has been really important for us. We are improving day by day.

"If I play, I think it will be unbelievable. It will be good to be back at home.

"I was there already to watch the games from the stand but it's not the same. I'm looking forward to being back with my family - with all Evertonians - and I want the three points."

Gomes admits it will be an emotional occasion when he steps back out on the Goodison turf.

There was an outpouring of sympathy from footballing world following his injury and that has continued throughout his recovery, something Gomes is hugely grateful for.

"[I want] to say thank you to everyone who was there to help me." he said.

"Everybody was great on my recovery. Honestly, I was the person with the issue but everybody was involved in my recovery - not only family but friends, staff, physios, my teammates as well, Evertonians, fans in general all around the world - everyone was really good.

"I felt the confidence to work hard to come back as soon as possible, so for that I'm really thankful for everyone."