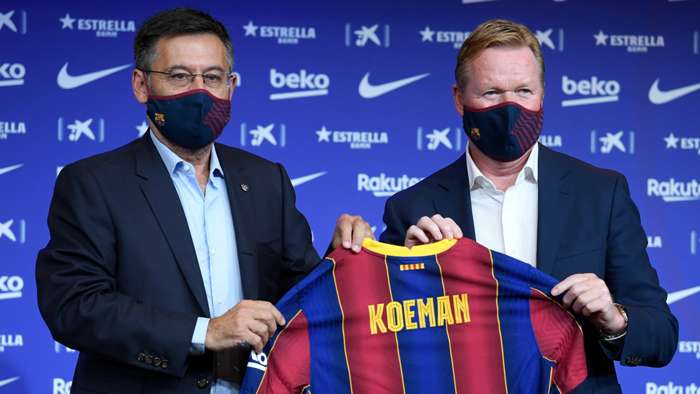 Barcelona presidential candidate Victor Font has insisted that RonaldKoeman will not be the club's manager if he is elected — even if the Dutchman wins a treble.

That loss has already seen plenty of fallout, with head coach Quique Setien and technical manager Eric Abidalalready departing andBartomeurefusing to step down ahead of thepresidential elections inMarch 2021.

Bartomeuselected former Barca star Koeman as the club's new head coach, confirming the appointment on Wednesday, but Font has made it clear he would not have the Dutchman in charge under his watch.

"If I am president,Koemanwill not be thecoach," Font told CadenaSER. "Koemanis a legend of Barcelona.We have to thank him very much that with the complexity that exists today in the club, and in the dressing room, and with the decisions that have to be made, he has taken on the challenge of being head coach.

"We must wish him the best of success and hopefully we win the treble.If in the end it were necessary and he wanted to, he could still contribute to our project in some way, but we will apply our project in its main structure from the vice president all the way down to the last youth football coach based on the organisation chart that we have prepared for a long time."

Font has made his preference for Barca's next head coach clear: club legend Xavi, who is currently at the helm of Qatar Stars League club Al Sadd.

“Xavi understands that all the pieces of the club have to fit together," Font said."A board of directors that lets whoever leads the sports project do his work, which in our case would be him.”

The future of Barca star Lionel Messi has been called into question after a trophy-less season, with reports stating the Argentine star wants out.

On Tuesday, Bartomeuinsisted that Messi would stay. Font, meanwhile, expects Messi's future to be no problem if he is playing under former team-mate Xavi.

"Messi is completely disappointed because of the critical situation at the club both in sports, and in economic and organisational terms. I expect that Messi will play under Xavi in 2021."