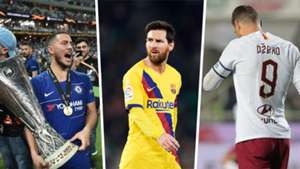 Goal rounds up the top business stories of the week from Soccerex, including venues being decided for the 2022 Europa League final, Super Cup and forthcoming Women's Champions League finals, FIFA's committee recommending a ban on clubs playing domestic games abroad and the effect that missing out on Champions League football has had on Roma's bottom line.

The match will mark the first major European men's final to be staged in the Hungarian capital.

The Puskas Arena opened in November last year and is slated to host four games during Euro 2020.

UEFA has also announced that Juventus' Allianz Stadium will stage the 2022 Women's Champions League final, while PSV's stadium will host the showpiece fixture in Eindhoven the following year.

The Kazan Arena in Russia will then host the Super Cup in 2023, despite the World Anti-Doping Agency's recommendation that the nation should not be allowed to stage major sporting competitions for four years due to the country's non-compliance over doping issues.

FIFA is pushing ahead with plans to prohibit leagues from taking games overseas, after its stakeholders' committee recommended regulations be put before the decision-making council.

The agenda for the meeting in Zurich included an item referring to 'matches played in the territory of another member federation', and after its conclusion the stakeholders' committee released a statement clarifying its stance.

It read: "With regard to matches and competitions with an international dimension, the committee endorsed the principle set out by the FIFA council that official domestic matches should take place on the territory of the member association concerned. Regulations on this matter will be submitted to the FIFA council."

Whilst the topic was discussed by the committee, it can only advise the 37-member FIFA council on passing regulations so any decision will have to wait until March 20 when the executive meet via video link.

The stakeholders' committee's recommendation could have major implications for La Liga. In each of the past two years, LaLiga North America, the Spanish body's regional joint venture with Relevant Sports, has attempted to host matches in the US but both attempts proved unsuccessful.

With overseas interest coming into Major League Soccer's (MLS) home market, commissioner Don Garber recently stated his opposition to the concept. Garber and US Soccer Federation (USSF) president Carlos Cordeiro both sit on the FIFA stakeholders' committee and were in Switzerland for the meeting.

Speaking before flying to Zurich, he said: "Personally, as we continue to develop professional soccer, both in the United States and in other leagues, I believe home games should be played at home stadiums. That has been my view from the beginning.

"It shouldn't be about one or two leagues trying to do something just because one or two clubs are pushing for it, when it is probably not even in the interests of that league."

For its part, Relevent filed an anti-trust lawsuit against the USSF back in September in a bid to deliver on LaLiga North America's ambitions of bringing a regular season game to the US. The suit alleges that the USSF conspired with FIFA and Soccer United Marketing (SUM), the MLS commercial arm that also serves as marketing partner to the national soccer body, to prevent matches from foreign leagues being held in the US. Both FIFA and SUM are named as non-party co-conspirators in the court filing.

The club's latest financial statement reveals that during the final six months of 2019, the club's overall revenues fell by EUR40.2m (?35m/$45m) to EUR94.6 million (?83m/$106m) after they failed to qualify for the Champions League. Missing out on the tournament has a knock-on effect on media rights and matchday revenues, which both declined in the period covered.

However, the club also saw sponsorship revenues for that period decline by EUR2.35m (?2m/$3m). Partnerships with the likes of Qatar Airways, Hyundai Motors, and the technical contract in place with Nike, account for the majority of the EUR10.8m (?9/$12m) coming in from that category.

The decrease compared to the first half of the previous year can mostly be attributed to the loss of revenues from the deal with Betway which had to be terminated in July 2019 due to the new national regulations on gambling industry marketing.