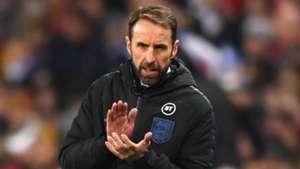 The Football Association will make an announcement in "due course" regarding any financial implications of the coronavirus amid reports England coach Gareth Southgate has agreed to take a 30 per cent pay cut.

The wages of football's top players and managers have become a hot topic as the enforced stoppage of activities around the world shows no sign of ending.

So far several clubs and organisations have announced pay cuts, although their implementation has been piece-meal to date.

At the other extreme, Tottenham and Liverpool have attracted criticism for cutting wages and furloughing non-playing staff respectively while refusing to touch players' wages.

The FA, however, looks set to take action, with Southgate reportedly happy to reduce his salary during the emergency.

"The financial implications of the coronavirus are not yet known, however, as a not-for-profit organisation, we want to ensure that we take the appropriate course of action to support the wider organisation and our employees," the organisation told Sky Sports News on Saturday.

"We will make a further announcement on our next steps in due course."

Premier League bosses Eddie Howe of Bournemouth and Brighton's Graham Potter have already announced that they will not draw their full salaries in a bid to help their clubs compensate for the lack of income during this recess.

The Professional Footballers' Association, however, has advised against blanket reductions, suggesting that such measures would in fact be harmful to the United Kingdom and its public health system as it bids to combat the disease.

"The players are mindful that as PAYE [pay as you earn] employees, the combined tax on their salaries is a significant contribution to funding essential public services - which are especially critical at this time," the union argued in a statement released on Saturday.

"Taking a 30 per cent salary deduction will cost the Exchequer substantial sums. This would be detrimental to our NHS and other government-funded services.

"The proposed 30 per cent salary deduction over a 12-month period equates to over ?500m in wage reductions and a loss in tax contributions of over ?200m to the government.

"What effect does this loss of earning to the government mean for the NHS? Was this considered in the Premier League proposal and did the health secretary, Matt Hancock, factor this in when asking players to take a salary cut?

"We welcomed the opportunity to discuss this with the Premier League today and we are happy to continue talks."

The PFA added that it recognised its top-flight members had a "responsibility" to contribute during the outbreak and that it would encourage the Premier League to up its own goodwill measures.

Per the government's latest data, the UK has recorded 41,903 cases of Covid-19, with 4,313 deaths attributed to the outbreak.