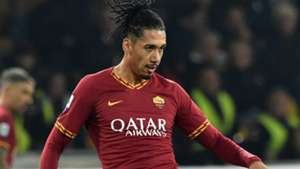 Gareth Southgate has admitted that he regrets publicly criticising Chris Smalling and hinted that the Manchester United centre-back could be recalled to his England squad.

Smalling was omitted from Southgate's plans ahead of friendlies against Germany and Brazil back in 2017 and hasn't featured for the Three Lions since, missing their run to the World Cup semi-finals in Russia as a result.

At the time, Southgate explained his decision by stating: "We want to play in a certain way and the players I have brought in I want to see using the ball from the back and building it up in a certain way."

Smalling's struggles at United did not help his case for a return to the international stage but he has rediscovered his best form since joining Roma on loan back in August.

The 30-year-old has racked up 28 appearances across all competitions for the Giallorossi this season, scoring twice, and recently admitted he would "love a call up for Euro 2020".

Southgate has been impressed by Smalling's performances in Italy and is eager to make "the right decision" when it comes to his squad selection for the summer tournament.

"I've never ruled anybody out. I think that would be wrong," the England boss said.

"I think I said I probably regretted the way the message [came over] - by praising others for certain attributes, there was criticism for Chris.

"It was my fault and it was unfair on him. I think he's done well in Italy. He's playing at another big club.

"He was obviously playing at a big club before. We're watching everybody because we've got to make sure we make the right decision.

"I spoke to him when I left him out of the squad and explained what I explained to everybody.

"Of course because of the way it came out, there was little point - I wasn't going to say anything that hadn't already been said."

Smalling hasn't ruled out remaining at Roma beyond the end of the season, with the Italian giants reportedly considering a permanent deal.

However, it is not yet known whether Roma will meet United's reported ?20 million ($26m) valuation, with head coach Ole Gunnar Solskjaer leaving the door open for the defender to return to Old Trafford later in the year.

Smalling will be back in contention for a place in Paulo Fonseca's starting XI when Roma play host to Sampdoria in Serie A on Sunday.