Dybala comes off injured for Juventus ahead of Champions League resumption

Dybala comes off injured for Juventus ahead of Champions League resumption 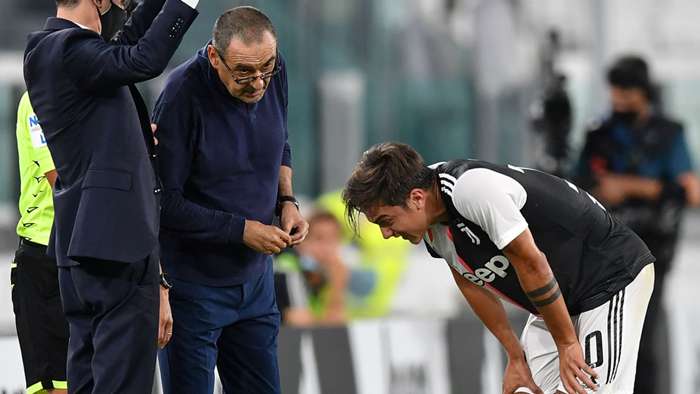 Paulo Dybala was forced off injured in Juventus' Serie A clash against Sampdoria on Sunday, causing Maurizio Sarri some concern ahead of the Champions League resumption.

But while they went into the break ahead, that victory may come at a price after the Turin side lost their forward in the first half.

The Argentina forward was clutching the top of his left thigh as he made way for Gonzalo Higuain five minutes before half-time.

Coach Sarri had already been forced into one change, with Danilo coming off following a clash of heads with Gaston Ramirez.

Juve continue their league campaign with matches against Cagliari and Roma next week before hosting Lyon in the second leg of their Champions League last-16 tie on August 7.

Now the Old Lady will hope for positive news from their medical department as they look to claw their way back into that clash.

Sarri's side will need to overcome a first-leg deficit after losing 1-0 in France back in February, with the winner movin g on to a shortened version of the final phase of the tournament which will take place in Lisbon over 11 days from 12-23 August.

But while Dybala's injury will come as a concern, the Bianconeri were on the verge of yet another title triumph at half-time as they led their opponents.

Cristiano Ronaldo's stoppage-time strike gave them a 1-0 lead at half-time against Sampdoria, with the Portugal star firing home from the edge of the box to convert a prepared free-kick move executed by Miralem Pjanic.

After suffering a disappointing 2018-19 alongside Ronaldo, Dybala has enjoyed a return to form this season having recovered from coronavirus during football's hiatus due to the pandemic.