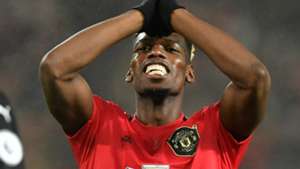 Paul Pogba has been urged to make a decision on his Manchester United future, with Rio Ferdinand admitting that a distracting saga is doing the "topsy-turvy" Red Devils few favours.

Ole Gunnar Solskjaer has overseen an upturn in fortune of late, with his side back in the mix for a top-four finish while also progressing through to the quarter-finals of the FA Cup and last 16 of the Europa League.

Efforts on the field are, however, being played out against a backdrop of Pogba-related rumours.

The World Cup-winning midfielder, who has been restricted to just eight appearances by injury this season, continues to be heavily linked with a move away from Old Trafford.

Ferdinand wants to see that speculation brought to a close so that definitive plans can be drawn up, with the former defender telling BT Sport: "I think that is a conversation that needs to be happening between Man United and Pogba.

"Does he want to stay or go? Does Ole want to keep him? Once that's ironed out you can build your team."

Solskjaer has continued to bolster his ranks in what remains a long-term rebuilding project at the Theatre of Dreams.

Ferdinand concedes that there is no quick fix to be found in Manchester, regardless of what happens with Pogba, with United still very much a work in progress.

He added: "They understood as a group that it wasn't going to happen overnight. I think this team are turning the corner but it's a slow process.

"It's not something we can look at and go right, 'that's a big change and Man United are back winning trophies'.

"This is a slow burn, though, after a few years of topsy-turvy times."

The Red Devils kept themselves in the hunt for more major silverware on Thursday with a 3-0 win over Wayne Rooney's Derby, with January signing Odion Ighalo adding two more goals to his tally.

Ferdinand is pleased to see the Nigerian frontman making an immediate impact after eyebrows were raised at his deadline-day arrival.

The ex-England international said: "People, and myself included, were probably thinking Odion Ighalo, where does he fit into all of this?

"If you have an opportunity to sign a player at the beginning of the January window, he is not the guy you are going to sign but what he does bring is a point.

"A point where they can focus and play into him from the midfield. He offers the platform to run off. Marcus Rashford and Anthony Martial want the ball in behind and not to bring people in."