Diallo to leave PSG for NWSL loan at Utah Royals 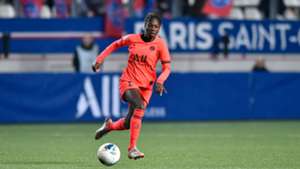 Aminata Diallo is set to leave Paris Saint-Germain for a loan spell at American Professional League (NWSL) side the Utah Royals.

Sources close to the proposed agreement have informed Goal that a short-term deal is set to be pushed through.

France international Diallo is set to leave her homeland in search of more regular game time.

Competitive minutes have been in short supply of late, but a change of scenery and new adventure should help to reinvigorate the 24-year-old.

Diallo, who spent time with Lyon as a youngster, has been on the books at PSG since 2016 and has earned seven caps for her country.

She is under contract in the French capital until 2021, but it remains to be seen whether that agreement will be honoured.

For now, her immediate future lies in the United States,

It is understood that Diallo is waiting on a visa before putting the finishing touches to a deal with the Utah Royals.

The opportunity to experience life outside of France is said to hold the greatest appeal to the midfielder.

The NWSL is a competitive league, with the chance to maintain the standards she has set at home also helping to convince Diallo that a stint in the United States will aid her ongoing development.

Having progressed to that level over the course of her career so far, Diallo is eager to earn more caps and become an established part of the Bleues squad.

She will be walking away from a PSG side that is enjoying an impressive season in Feminine Division 1.

Just one defeat has been suffered through 16 games, with a healthy haul of 13 wins collected.

Diallo will have time to get up to speed when linking up with Utah Royals as their 2020 campaign is yet to get underway.

The NWSL season is due to start in April, with the Royals opening up with a trip to face the Portland Thorns.

They finished sixth in 2019, having seen a first season in existence a year earlier deliver a fifth-placed standing.