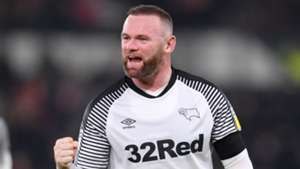 Wayne Rooney is relishing the chance to face his old club Manchester United in the FA Cup and admitted there was cheering on Derby County's bus when the draw was made.

Ole Gunnar Solskjaer's side will come up against the club's all-time leading scorer in Rooney in Thursday's fifth-round tie at Pride Park.

Rooney returned to England in January on a player-coach deal and he netted in the Rams' 4-2 win over Northampton Town last month, a victory that set up a reunion with United.

"Obviously, the draw, the one team I wanted was Man United. We were on the coach, actually, going to the hotel the night before a game when the draw was taking place and there was a cheer when Manchester United came out.

"It is a great draw for us, having United come to our ground and for the fans it is a great game to go to.

"For us as a team it is a great challenge for us to come up against Manchester United, to see if we can beat them. It is a challenge, but it is something we are all looking forward to."

Rooney faced United twice as an Everton player in 2017-18, though he ended up on the losing side in both games as his boyhood club were beaten 4-0 and 2-0.

He said he would celebrate if he netted on Thursday, though he promised not to react with the same level of gusto as he did when returning to Everton during the early years of his United career.

"No, it won't be like that, of course," he said of a repeat of those badge-kissing celebrations.

"I think everyone will understand. I want Derby to win in this game and after the game I'll go back to being a Manchester United fan and wanting them to win in the games after our one."