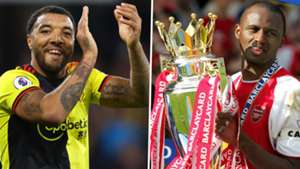 Watford sent a cheeky message to Arsenal after their 3-0 victory over Liverpool ensured the records held by the famous Gunners 'Invincibles' side remained intact.

"Dear Arsenal, you're welcome" was the message tweeted to their Premier League rivals after two goals from Ismaila Sarr and another from Troy Deeney secured a famous win for the Hornets at Vicarage Road.

The result meant Liverpool's 44-game unbeaten league run came to a shuddering halt, a run stretching back 422 days to a 2-1 defeat to Manchester City at Etihad Stadium on January 3, 2019.

It ends their hopes of going the whole season unbeaten and matching the achievements of Arsene Wenger's side in 2004 and Preston North End way back in 1889.

It also meant the Reds fell five games short of the record 49-game unbeaten run set by that same Gunners side from May 2003 to October 2004.

It is little wonder then that Arsenal had simply tweeted "phew" immediately after the game, in relief at their records remaining unbroken.

The defeat also meant Liverpool missed the chance to secure a 19th successive win and break the record of 18 they currently share with Manchester City.

However, it wasn't just the result but the manner if it that caused such shockwaves through the sport.

Just stopping Liverpool from scoring goes down as a significant achievement, with it being the first time the Reds failed to hit the back of the net in the league since a goalless draw against Everton 11 months ago, a run of 36 matches.

The fact one defeat had so many ramifications on the record books highlights just how successful Jurgen Klopp's side have been over the past 18 months.

They have been utterly dominant in the Premier League this season and, despite this setback, remain 22 points clear at the summit and on course for a first league title in 30 years.

But for Watford, the most important aspect of the result is the three points that lifts them out of the relegation zone.