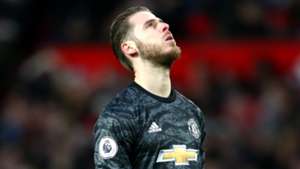 Mark Bosnich has backed David de Gea after the Manchester United goalkeeper's horrendous error against Everton, insisting there is a "very fine line between arrogance and confidence".

United's top-four bid was dealt another significant blow on Sunday, as they were held to a 1-1 draw at Goodison Park by the Toffees.

De Gea was guilty of gifting the home side the lead in the third minute of the game, as his clearance rebounded off the onrushing Dominic Calvert-Lewin and into the back of the net.

A Bruno Fernandes equaliser bailed United out of jail, but they ultimately missed a golden opportunity to move to within a single point of Chelsea in the race for the final Champions League spot.

Ex-United midfielder Roy Keane, who covered the game as a pundit for Sky Sports, claimed he would have "lynched" De Gea at half-time if he was in charge, while insisting that the Spain number one had "no excuses" for such a glaring error.

Bosnich does not believe that an old team-mate is in the position to "make that type of call", and thinks De Gea responded "very well" to the mistake by making a string of important saves in the second period.

"It wasn't a good error but in terms of being arrogant, unless you know the person 100 per cent I don't really think you can make that type of call," the former United goalkeeper told Sky Sports News.

"In terms of the goalkeeping position, there's a very fine line between arrogance and confidence. Yes, it was a poor mistake but he came back from it very well to be fair."

Ole Gunnar Solskjaer also defended De Gea after the match, insisting he remains the "best in the world" despite the fact he has now made more errors leading to goals than any other goalkeeper in the Premier League this season.

Bosnich was delighted to see the United head coach stand up for a prized asset, as he added: "That's what good managers do, they stick up for players publicly. Privately it may have been different but publicly they stick up for all their players."

The Red Devils must now look ahead to an FA Cup fifth-round tie against Derby County on Thursday, before preparations for Manchester City's arrival at Old Trafford get underway.

The reigning English champions look destined to lose their crown to Liverpool, who have stormed 22 points clear at the Premier League summit, but they did secure a third successive Carabao Cup triumph on Sunday by beating Aston Villa at Wembley.

City can also still win the Champions League and the FA Cup, with Bosnich of the opinion that their domestic struggles should not detract from a potentially "fantastic season".

"Has it been disappointing in the league? Of course it has but [Sir] Alex Ferguson used to say 'to win one trophy is a good season. To win three is a fantastic season."