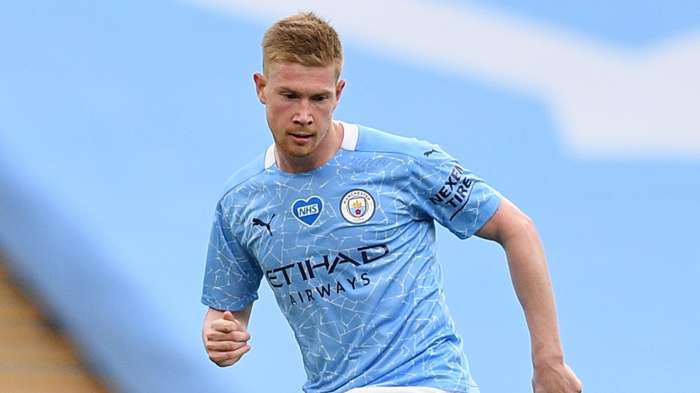 City paid £55 million (€60m/$72m) to bring him to Etihad Stadium from Wolfsburg, and he has since proved to be worth every penny, scoring 56 goals and laying on 89 assists in 220 appearances.

The Belgian has been the driving force behind the club's latest bid for silverware across multiple fronts, with many now calling for him to pick up the PFA Player of the Year award for 2019-20.

Pep Guardiola's men have already won a third successive Carabao Cup with De Bruyne orchestrating proceedings from the middle of the park, and an elusive Champions League crown could also be secured when the competition resumes later this month.

United's all-time record goalscorer Rooney has recalled being at the mercy of the 29-year-old's technical abilitywhile playing for Everton, and drew similarities between the playmaker's game and ex-Liverpool captain Gerrard.

"There’s no doubt Man City’s biggest weapon is De Bruyne,arguably one of the top three players in the world right now," the Derby midfielder wrote in his latest column for The Times.

"Playing against him was never, ever, easy and I’ll always remember Everton using me and Morgan Schneiderlin, in a 4-4-2, against a City midfield of De Bruyne, David Silva and Fernandinho, with Sterling dropping in.

"They absolutely outnumbered us. Me and Schneiderlin were in the middle of the pitch saying, 'What’s going on here?!'We were 3-0 down after 37 minutes and had 18 per cent possession in the game.

"De Bruyne reminds me a bit of Steven Gerrard. He drifts out to that right-hand side and plays some brilliant balls whipped in, like Stevie used to. What I like most is he takes chances, he takes risks, he doesn’t go for the easy ball -he plays the hard pass."

The former United striker added: "You watch, when he’s in possession in space other players start running and that’s the biggest compliment you can pay a midfielder.