Arteta: Willian is starting to show why Arsenal signed him

Arsenal head coach Mikel Arteta believesWillian is finally starting to show why the club invested so heavily in the former Chelsea winger.Willian, who is reportedly being paid a...

A mix-up between European time zones causedManchester United to miss out on signing Erling Haaland for just £3 million ($4.1m) when he was still at Molde, reports the Mirror.The...

'You haven't seen it but some of the players have' - Solskjaer clai...

Ole Gunnar Solskjaer has said he is the worst loser atManchester United, even surpassing the highly expressive Bruno Fernandes.But the club's manager said he is an even worse lo...

Andrea Pirlo has claimed Juventus lacked the experience required to close out the game withVerona, and said the Old Lady are in an “emergency situation” when asked if they are t...

'Maybe it is our fault' - Tuchel admits Chelsea's possession-based ...

Thomas Tuchelbelieves thatChelsea's style of play sometimes holds Timo Werner back as the possession-hungry side cause opponents to sit in defensive shapes.Werner has scored jus...

De Bruyne is almost unstoppable - and Man City might be too 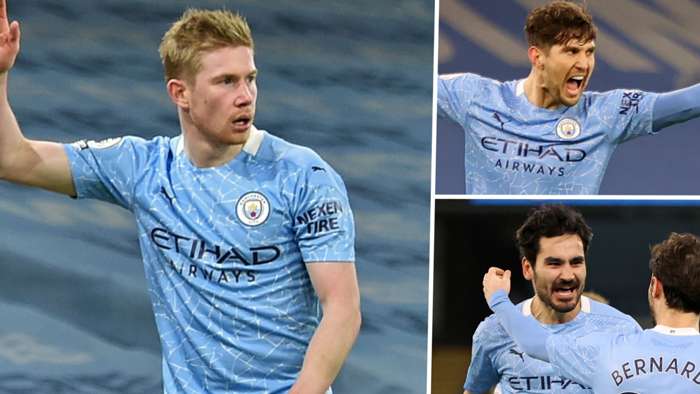 For the opening 25 minutes of Manchester City's clash with Crystal Palace, the Eagles' assistant manager Ray Lewington's booming instructions could be heard around the Etihad Stadium.

Palace, though, had not reckoned for the brilliance of Kevin De Bruyne.

After a corner was cleared back to him and unable to get down the line, the Belgium international was forced to deliver into the box with the outside of his right foot.

With a beautiful swish he delivered an inch-perfect cross to the back post for John Stones to head home and break Palace's resistance just past the midway point of the first half.

The assist was De Bruyne's 100th in a City shirt and took him into the top 10 in Premier League history with 76 in the English top-flight.

It also marked the fifth occasion that he has recorded at least 10 assists in a league season in Europe's 'Top Five' leagues. The only person who can match that since De Bruyne first achieved the feat in 2014-15 is a certain Lionel Messi.

“What can I say about him again?” Pep Guardiola said post-match. “The managers can help with many things, but the talent up-front belongs to them and managers are lucky to be in charge with these kind of players to make your life easier.

“The last two seasons we struggled to beat them and I understood why, you can only break it with the quality of the players up front. This is a special quality the managers can’t give.”

Given how well they were coping in the early stages, De Bruyne's moment of brilliance must have been so dispiriting for the Palace defence. The 28-year-old is in almost unstoppable form right now.

"He has done it over the seasons that I’ve been here,” Stones, who himself netted a second after the break, told Sky Sports. “I remember a few off the top of my head to Leroy Sane when he was here, some outrageous passes when you think I don’t know how he’s done it.

“He put the ball in and I knew it was coming straight to me. It’s something we can only dream of and Kev can just do it when he wants.”

With De Bruyne bending the game to his will, there are few - if any - who can compete with him as the Premier League's top dog, and City are reaping the benefits.

As the likes of Mohamed Salah and Bruno Fernandes fluffed their lines at Anfield earlier on Sunday, De Bruyne continues to be the most consistent playmaker in the division, and if he maintains that form then the title could well be City's.

The stalemate between Liverpool and Manchester United means Guardiola's side are now just two points off leaders United at the top of the table with a game in hand, and would go top for at least a few hours with a win over Aston Villa on Wednesday.

They have become the first team in this most inconsistent ofseasons to win five successive Premier League games, with De Bruyne's playmaking ability being matched by a defence that has conceded just two goals in their last nine outings.

The Villa clash will be followed by trips to West Brom and Burnley either side of a home game against bottom-side Sheffield United, meaning that they have a very strong chance of arriving at Anfield on February 6 clear at the summit.

Leeds United are looking to build on their comfortable win over Southampton w...
More