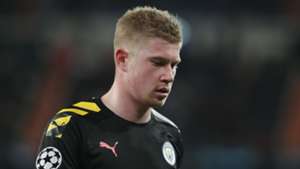 Kevin De Bruyne has trained and could be fit to face Manchester United in the Premier League on Sunday, according to Pep Guardiola.

Manchester City's star man injured his shoulder in last weekend's Carabao Cup final win over Aston Villa, after coming on for the last half an hour of their 2-1 win.

With City facing United, Arsenal and Real Madrid in the coming weeks, there had been concerns about De Bruyne's fitness - but Guardiola had good news in Friday's press conference.

"He is getting better, training and tomorrow he will improve," Guardiola said.

"He feels better. We will see [about Sunday's game]."

March could be a season-defining month for Guardiola and City, with key fixtures in the league as well as their Champions League last-16 second leg and an FA Cup quarter-final with Newcastle - before April kicks off with a home fixture against Liverpool.

City are on a five-game winning run since the beginning of February, and Guardiola has been glad to see his side recapture their form.

"It was a good month for us after the little break that we had," he added.

"We had West Ham at home, Leicester away, Real and then the final of the Carabao Cup.

"We know how difficult these games are. I think we did well. There are a lot of games still to play."

For now, all attention is on Sunday's Manchester derby and it will be the fourth such fixture in as many months, with City looking to level the scores at two wins apiece this season.

Ole Gunnar Solskjaer has outlined his hopes for a 'classic' derby fixture, and it is a game Guardiola is anticipating with relish.

"I love it. Derbies are special," he said.

"The situation this season is a little bit different because we are playing to improve and finish second, not to win the title.

"For them it is so important to qualify for the Champions League. It is important to improve what we want to do.

"I've always believed United are a strong team. The game at home that we lost they played a good 30-34 minutes. Always, I have a big respect for United.

"Winning games and titles is good for our mood and confidence."