Manchester Cityâ€™s Champions League quarter-final clash with Lyon is attracting controversy before a ball has even been kicked, with the Ligue 1 side being urged to complain abou... 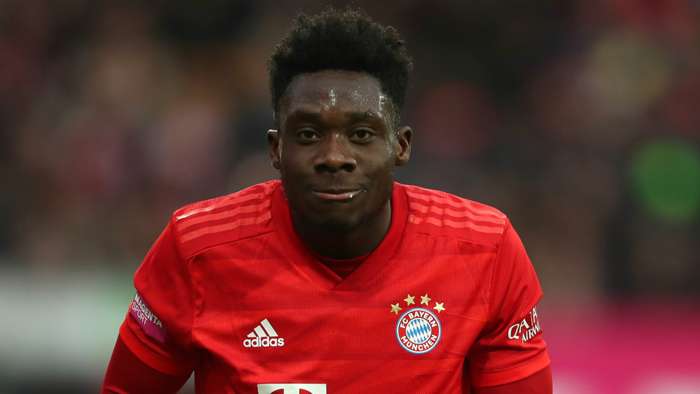 The 19-year-old speedster â€“ who capped a fine campaign with the 2019-20 Bundesliga Rookie of the Year awardâ€“ has been a revelation on the left side of Bayern's defence, helping the German powerhouses to an eighth consecutive league crown.

Davies also recorded a top speed of 36.51 kilometres per hour in Bayern's 1-0 over Werder Bremen in June, the fastest of any Bundesliga player since at least 2013-14.

The success of Davies, however, comes as no surprise to Welsh coach Robinson, who handed the Canada international his debut as a 15-year-old for the Whitecaps in MLS.

So, Robinson knows Davies better than most and while he is on the path to greatness, the ex-Wolves midfielder insisted there is still plenty of room for improvement.

"I do," Robinson â€“ now coach of A-League side Newcastle Jets â€“ told Stats Perform News when asked if Davies can become a Bayern legend.

"But one of my coaches had said to him, there was a clip where they saw him getting back on Mason Mount from 30 yards in the Champions League. Mount was breaking and Alphonso managed to get himself back into that area and stop the danger. Everyone was raving about how quick he is, he's not human, he's so quick.

"It's interesting that one of my coaches, Pa-Modou Kah who is now the manager of Pacific FC in the CPL and a very talented coach, turns around and says, 'Alphonso, you were in the wrong starting position'.

"So, the way he gets taught is very important. He is scary in relation to his physical attributes but the detail in it was he was in the starting position. Can you imagine if he plays against a player like him, who is as quick as him, speed of thought is quicker and more experienced? He's not getting back and it will be 1-0. The teaching point for him there was he's had an excellent season, so many attributes you can build on and they're already talking about him being a â‚¬50 million, â‚¬60m player, but there's still areas on his game that he needs to improve.

"What I've learned over my career, the top players need to be coached. If you don't coach them, they complain and moan. They want to be taught. That's why the best managers in the world and Premier League â€“ the Mourinhos, Pochettinos, Klopps and Guardiolas â€“ they are just so demanding on their players and you can see them getting frustrated sometimes with their top players because they need to be coached and you need to show them. If you do that, they progress.

"Football is short. The lifespan of a footballer is very, very small. Your life actually starts when you retire. So, the window gets shorter every year but it's important you learn. Lots of good things but also areas to improve if he's to play at that level year in, year out, which I firmly believe he will. But when he comes up against a Marcus Rashford, he needs to be in the right position or he probably won't get back in time."

Rewind back to July 2016 and Robinson â€“ coach of the Whitecaps at the time â€“ introduced Davies to MLS football, just one day after signing a league contract with the club.

Davies came off the bench against Orlando City and became the second-youngest player to take the field in MLS at 15 years, 257 days, behind Freddy Adu (14 years, 306 days).

"It's a great success story for him. I'm really pleased. I'm not surprised one bit," Robinson added.

"Yes, I gave him his debut and I'm really proud that I did do that because back then, I knew what I saw and I gave him that chance. That's what leads me into this next chapter of how can I judge a player when I don't give them a chance? Can you imagine if I didn't make the decision to throw on Alphonso because there were people that said he wasn't ready to play and he wasn't ready to step into first-team football?

"We played Crystal Palace in a friendly game at BC Place and I was told he wasnâ€™t ready but I listened to my staff and coaches key to me, and I believed them and took the chance...Alphonso deserves all the credit.

"He is a fantastic, talented young boy. Now it's about consistency because after having a very good year at left-back, which was key for his development, then he has to do it next year and the year after. Then, he can be put into the category of the Gareth Bales, Ashley Coles, the top players like that all over the world. That will be his next challenge but I firmly believe he can do it because he's a good kid."