Conor Gallagher can be 'the next Gilmour' for Chelsea - Curbishley 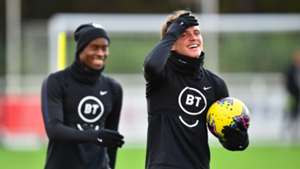 Conor Gallagher could be destined for great things at Chelsea, according to Alan Curbishley, although the ex-Charlton manager was surprised that the on-loan midfielder opted to leave his former club for Swansea City in January.

The 20-year-old made the switch during the winter transfer window in order to compete at the top of the table - and to play under his former England Under-17 manager Steve Cooper - but the Swans dropped from sixth place to 11th before the coronavirus shutdown.

Gallagher, however, has maintained a high level of performance despite his team's indifferent form and he has six goals and seven assists so far this season. He was named the EFL's Young Player of the Month for August 2019 and could well follow fellow youth graduate Billy Gilmour into the Stamford Bridge first-team picture.

Curbishley has watched Gallagher closely due to his relationship with former player Lee Bowyer, now manager at Charlton, and he has been impressed with what he has seen so far.

"You saw Billy Gilmour [recently] and there are some good players coming through at Chelsea," Curbishley told Goal at the London Football Awards. "He needs to be playing, Gallagher has shown that this season that playing regular football has helped him enormously.

"He can play for Chelsea for sure in the future. He has got box-to-box energy, can find a pass and score a goal. He is a team player and a good lad as well, as I understand it, which helps."

However, Curbishley went onto say that a move from South East London to South Wales wasn't necessary to continue his development.

"I was a bit surprised by that and I think they were as well," he added. "I saw him a couple of times. I didn't quite see why he made the move to be honest.

"If Swansea were in the top three or top two then fine but he was playing really well, living at home and that's a big thing. These things happen and I think he is a good player."

Gallagher say on the bench for last season's Europa League final win against Arsenal in Baku, earning a winners' medal, and has cited Blues boss Frank Lampard as an inspiration.