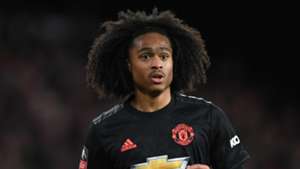 Manchester United youngster Tahith Chong is on the verge of signing a new contract with the club, his agent has confirmed.

Speculation over Chong's future has been ongoing for several months, with his existing deal at Old Trafford due to expire in the summer.

Barcelona and Juventus have been credited with an interest in the 20-year-old, along with Inter, who had reportedly already reached an agreement to sign him on a free transfer.

However, it now looks as though Chong will snub a move to Italy in favour of extending his stay in Manchester, having been offered the chance to commit to fresh terms with his current club.

The Netherlands Under-21 international is reportedly set to sign a new long-term contract worth ?30,000 per week, with it his desire to continue his development at United.

Stellar Group's Erkan Alkan, who represents Chong, has confirmed the offer from United while also validating rumours of "big clubs" being in contact over the midfielder's availability.

Alkan told Dutch publication AD : "There was a lot of interest, we talked to big clubs, but Manchester United came up with a good plan for Tahith.

"He likes to stay with the club that brought him from the Netherlands."

Chong has racked up 10 first-team appearances across all competitions for the Red Devils this season, the last of which came in a 5-0 Europa League victory over Club Brugge on February 27.

United head coach Ole Gunnar Solskjaer confirmed that the club were in talks with the Dutchman and fellow academy star Angel Gomes over possible renewals shortly before that outing, but the latter's future remains up in the air.

Both men could be back in contention for some rare minutes when United travel to Austria for another European fixture on Thursday.

Solskjaer's men have been drawn against LASK in the round of 16, with the first leg set to take place at the Raiffeisen Arena.

United will turn their attention back to the Premier League three days later, as they look to maintain a promising recent run by beating Tottenham in north London.

After winning eight of their last 10 matches, the Red Devils have emerged as genuine top-four contenders once again and will be buoyed for another vital week of action after beating Manchester City 2-0 at Old Trafford over the weekend.