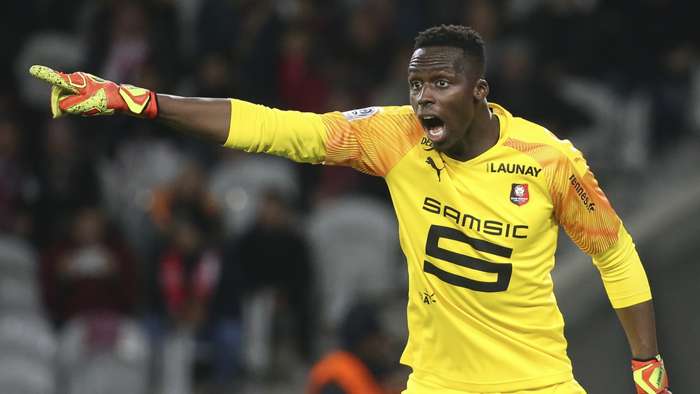 Chelsea have agreed a feeof around £22m ($29m)with Rennes for goalkeeper Edouard Mendy, Goal can confirm.

The Blues have been locked in talks all month after making their first approach, with the Ligue 1 side keen to secure a higher fee while also considering their options for a replacement.

Rennes asked for Fikayo Tomori on loan as part of the deal but the Blues have been reluctant to sanction his exit at this stage of the transfer window.

Chelsea's technical and performance advisor Petr Cech was heavily involved in the recruitment process for a new goalkeeper, with his expertise having been considered.

The Blues' head of the goalkeeper department Christophe Lollichon was also consulted in the move for Mendy, with both he and Cech having both made the switch from Rennes to Chelsea in 2004.

Mendy spent just a season with Julien Stephan's side, playing 34 games in their historic effort to earn qualification to the Champions League for the first time.

The move throws Kepa Arrizabalaga's future into further doubt amid criticism over his form following his £72m ($92m) transfer from Athletic Club in 2018.

Chelsea will keep the Spain international to compete with Mendy, with Kepa provingtoo expensive for the likes ofSevilla and Valencia, who can't afford his wages or a transfer fee.

Frank Lampard's side have now spent well over £200m ($252m) in the summer transfer window having already added six players.

Ben Chilwell was added to the defence,while there were a further two free transfers - defenders Thiago Silva and Malang Sarr, formerly of Paris Saint-Germainand Nice.

West Ham's Declan Rice is another key target for Lampard but it remains unclear whether the England international is a viable option, with the Hammers very reluctant to sell a star player to a rival.

Meanwhile, Chelsea are aiming to offload a whole host of players before the transfer window closes on 5 October, with Lewis Baker having already joinedTrabzonspor on loan with an option to buy.

AC Milan are in similar talks over a deal to sign Tiemoue Bakayoko,while Davide Zappacosta is thought to have agreed on a loan move to Genoa.

Chelsea are also looking to move on Emerson Palmieri, Victor Moses, Baba Rahman and Danny Drinkwater on either loan deals or permanent moves.