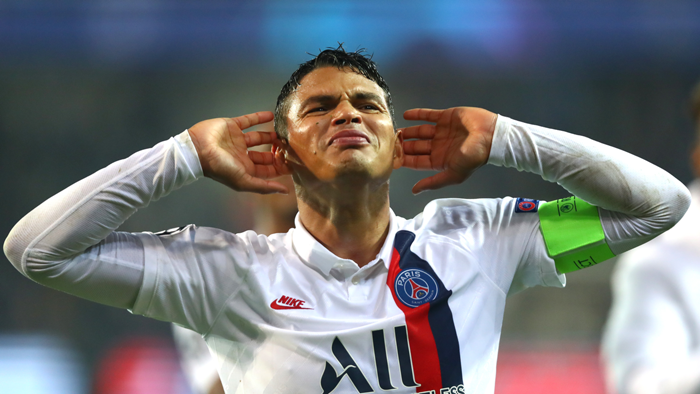 Chelsea have been offered PSG centre-back Thiago Silva ona free transfer as they mull over replacements in the heart of their defence.

Silva is set todecide on his future after the Champions League final on Sunday.

The Blues have been cautious over switches to their central defensive positions as they prioritise signing both Bayer Leverkusen's Kai Havertz and Leicester City's Ben Chilwell in the early phase of their transfer window.

There is optimism that the Blues will complete both deals in the coming weeks despite the huge expense on both transfers. Chelsea had meetings regarding the 21-year-old Germany international on Wednesday to work out how to pay closer to Leverkusen's valuation, which is €20 million (£18m/$24m) more than Chelsea's latest offer.

Despite playing almost all of last season in midfield, West Ham's Declan Rice is the clear standout target to improve Lampard's defence, with interest also having been shown in Brighton pair Ben White and Lewis Dunk.

Dunk, however, signed a new deal with Brighton on Friday.

Leeds United are more aggressively pursuing White,having made a £25m ($33m)bid this week for their loanee of last season.

Still, Neither Frank Lampard nor the club have told any of their players that they are surplus to requirements at this stage, despite poor defensive performances leading to 54 goals being conceded in last season's Premier League — the most of any of the top 10 sides.

It is the worst such total since Roman Abramovich bought the club.All four of Chelsea's centre-backs remain in limbo over their futures, with the club stalling on any decision over a loan move from Rennes for Fikayo Tomori.

Meanwhile, Andreas Christensen and Antonio Rudiger's futures are in doubt with less than two years left on their current deals and noapproaches yet from the west Londoners over an extension.

Reports in France have suggested Kurt Zouma's representatives have sounded out PSG, while Everton are still thought to be admirers of their former loan star.

It is understood that several Blues stars will seek clarity on their future in pre-season with Ethan Ampadu and several other loan stars set to join up with the squad.

Chelsea begin pre-season training on Saturday having had a testing day at Cobham Training Centre following a brief holiday in between the two seasons.

Lampard is aware that his side's defensive issues are partly down to Kepa's loss of form, with sources describing a loss of confidence within the squad in their side's No. 1.

The £71 million ($93m) goalkeeper was seen being criticised by his defenders at Anfield for not coming for a late cross that allowed Virgil van Dijk a clear chance in the 5-3 defeat in July.

The incident reflects the general concern in the squad over their goalkeeper's form with back-up option, Willy Caballero, turning 39 next month.