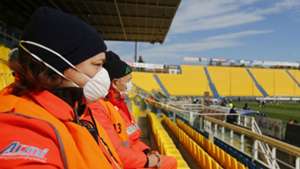 There was a state of confusion before SPAL's scheduled Serie A match with Parma, as the players were in the tunnel when the match was 'called off', only for it to begin 75 minutes late.

The match had scheduled to begin at 11:30am GMT (12:30 CET), but with the players having completed their warm-ups and ready to play, the referee called them back into the dressing rooms following an announcement that the Minister for Sport was considering a total suspension of Serie A in light of the coronavirus outbreak.

Following a 35-minute delay, it was announced that the fixture would go ahead, albeit at 12:45pm GMT, a delay of more than an hour.

Damiano Tommasi, the president of the AIC, the Italian Players' Association, had asked for the suspension of all games in the country until such a time that the virus, which has infected more than 5,000 people in Italy, is under control.

Sports Minister Vincenzo Spadafora had issued a statement on Sunday morning which seemed to back up Tommasi's request and led to the confusion before the SPAL fixture.

"I share the views of Damiano Tommasi, President of the Italian Players' Association, and I unite with his call to suspend the football league," he said.

"It makes no sense at this moment, while we ask our citizens for enormous sacrifices to prevent the spread of the contagion, to risk the health of players, referees, coaches, fans who will certainly gather to see games, just to protect the interests that revolve around the sport.

"Other federations have wisely decided to suspend football for the next few days. I think it is the duty of the FIGC President Gabriele Gravina to reflect again, without waiting for the first case of a Serie A player infected, before taking on this very serious responsibility."

Gravina had previously indicated that he "would not ruled out suspending the whole season" if a player tested positive for the infection.

All sporting events in Italy will be played behind closed doors until at least April 3, while the face of the fixture list has been dramatically altered in recent days due to events in the country.

The six postponed fixtures from last weekend are due to take place this week, including Juventus' encounter with Inter, which promises to have a massive bearing on the destination of the Scudetto.