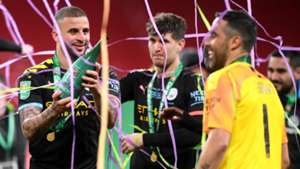 Bravo delivered an inspired moment for City at Wembley when he produced a fantastic diving save to keep out Bjorn Engels' header in the dying embers of the final.

His contribution helped to deliver a third consecutive Carabao Cup trophy for Pep Guardiola's men, and left-back Zinchenko was more than grateful for the Chilean's performance.

"Someone said in the dressing room afterwards that we should now rename this as the Claudio Bravo Cup rather than the Carabao Cup!" said Zinchenko.

"Because Claudio did it again for us (with that save). It takes a lot to do that (the save at the end).

"Everyone was talking about him in the dressing room."

City took a 20th minute lead through Sergio Aguero and that was quickly followed by a bullet header from summer signing Rodri to leave Guardiola's side seemingly in cruise control.

Villa pulled a goal back late in the first half, however, through Mbwana Samatta and came out strong in the second half before really putting the pressure on City for the last 20 minutes.

Zinchenko added: "The game was a big battle. Villa were very well organised defensively and it was not easy but everyone understands that. It was a Cup final.

"It's an unbelievable feeling to win the trophy again. It's an incredible feeling to play at this stadium. We did it again three times in a row and it's so important for us to win every title."

The Carabao Cup could be the first of three knock-out competitions City can win this season, with the FA Cup and Champions League still on the agenda now that the Premier League title is seemingly out of reach.

City face Sheffield Wednesday in the FA Cup fifth round in midweek and also hold the advantage over Real Madrid in their last-16 Champions League tie, with Zinchenko hoping for a positive end to the season.

"We have an unbelievable squad and we want to fight for all the titles," Zinchenko said. "Everyone is happy but now we have to think about the next games as we still have other challenges.

"We have to focus on our performance for every single game and then at the end of the season we will see if it has been a successful season for us.

"We are still fighting for other titles, we have to do our job and then we will see.

"We have the Champions League, we have the FA Cup and we are going to fight for these kind of titles and then we will see what happens. Everyone is focused on the next game, we don't think too much ahead."