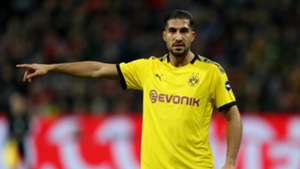 Emre Can has revealed Manchester United were one of three Premier League clubs that tried to sign him in January before he decided to swap Juventus for Borussia Dortmund.

The 26-year-old was struggling for regular game time in Turin and didn't hide his anger when he was excluded from Juve's Champions League squad at the start of the season.

Having began his senior career with Bayern Munich, Can opted for a return to the Bundesliga earlier this year as he signed a loan deal with Dortmund that was quickly made permanent.

A Premier League return was also an option for the Germany international but his Liverpool history quickly ruled out signing for one of the three clubs that came calling.

"I had three offers from the Premier League alone, including from Manchester United, but I didn't think about that for a second because of my Liverpool past," Can told Kicker.

"I have always had an extreme sympathy for BVB. I wanted to go to a club for which I can be important where I am needed. That's the case in Dortmund. Borussia suits me well - and vice versa."

After scoring on his debut for Lucien Favre's side Can has settled well in Dortmund, with he and fellow new recruit Erling Haaland helping the club to a current five-game winning streak.

It's been an ideal start to life for a player that grew up obsessed with victory and to this day hates defeat with a passion.

"When we were kids we kicked on a rubber court and always played a 'mini World Cup'. We spent a lot of time digging until our knees looked bad, but it was always about winning," Can said.

"I learned this quality on the football field - and it goes with me everywhere. No question, you can learn from a defeat. But winning is much cooler. I hate to lose."

So desperate to taste success with Dortmund, Can recently called on his side to start playing dirty to ensure they keep touch with current Bundesliga leaders Bayern Munich.

"We conceded goals too easily. I've only been here for a week but this team, which was enormous potential, has to learn one thing: to put it crudely, we have to play dirty sometimes and commit fouls if we have to," Can told Sky Germany in February.

"Everyone has to defend together. We all have to get better defensively as a unit, from front to back. I don't just mean the goalkeeper or the defenders, I mean everyone.

"It's a setback for us but the season still has a long time to go. I believe in this team, I've realised that in my short time training with them. I'll definitely be throwing myself into my work to help the team, because I can play better as well. You'll see that in the future."