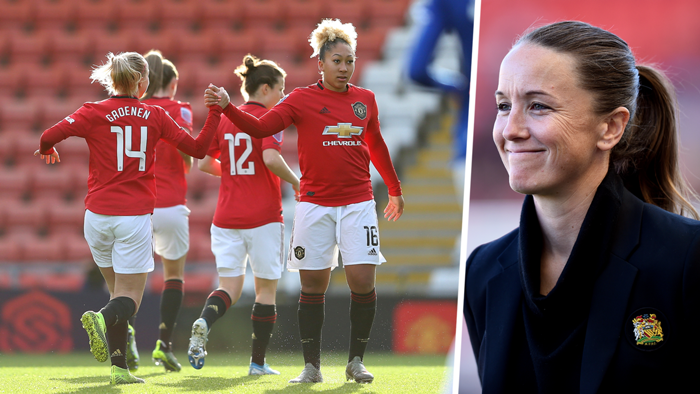 Manchester United’s women’s team are just two years old, yet, as the new Women’s Super League season gets underway, we’re talking about them competing for a Women’s Champions League place.

It speaks wonders of what the club have done in that short time span that such a discussion is happening, with them finishing fourth in the standings last term in their first year since promotion.

With head coach Casey Stoney having strengthened her squad this summer, and the European qualification spots potentially opening up to three in the WSL this season, United may not explicitly set their target at a top three finish, but they could well be capable of it.

Stoney’s transfer business has been subtle but smart. Lucy Staniforth brings creativity and depth to midfield, full-back Ona Batlle adds reinforcements in a defence Stoney will be keen to improve and Ivana Fuso is a youthful forward who gives the front line another dimension.

USWNT stars Tobin Heath and Christen Press are still rumoured to be arriving, too.

The general added depth is great for a team who will be expected to go far in cup competitions again, but who also need fresh legs for the league.

United’s starting XI could be rather easy to predict last year, which will have no doubt helped opponents. That’s understandable given they had just been promoted, of course. Stoney was never going to overhaul her squad in one summer, particularly after they performed so brilliantly in the Championship.

This year, that ability to rotate a little more, especially between players who offer very different options, will be important for a team who picked up too many disappointingresults last year.

“We’ve been quite honest about our performances in year one,” Stoney said recently.

“We’re still very young in our journey and to go into that top three we need to be more consistent. We know that. We dropped points against teams we shouldn’t have.

“If we want to get in there we need to win more, keep more clean sheets, and to do that we need to keep developing our players and our team.”

Away at West Ham in December, they were 2-1 up with 10 minutes to go, but managed to lose 3-2. It’s results like that which cannot happen if they want to push Chelsea, Manchester City and Arsenal for the top three.

The middle of the table will be more competitive than ever this year, too. Everton and Reading in particular harbour ambitions of breaking into the Champions League spots, while Tottenham and West Ham have both recruited well on top of that. The games are going to get even tougher and not dropping points is going to get even harder.

“Even maintaining fourth is going to be difficult because everybody’s strengthened,” Stoney noted.

Nonetheless, the 13 points United finished behind third-placed Arsenal last year is a bit misleading. United only lost each of their games against the big three by 1-0 scorelines. They also beat rivals City 2-0 in the Continental Cup group stages.

On the pitch, in those games, you could see they weren’t that far off. It was just a final ball, a cutting edge, a defensive error or a clinical finish that sometimes cost them. The players their opponentscould bring off the bench, too, were game-changing.

Chelsea and Man City still needed to go to United’s home ground of Leigh Sports Village until the Covid-19 pandemic ended the season early. It’s notoriously one of the toughest places to go in the WSL, such is the impact of the home fans, and one wouldn’t have bet against Stoney’s side getting a good result from at least one of the games.

That will be another major factor this year as they look to go one better. Without fans, United will lose some of that intimidating factor in home games that few teams in the WSL can compete with.

Sunday’s game against Chelsea is a great chance to see just where this team are.

“Casey is a top manager, she’s improved her squad and they will compete even more this year,” Chelsea boss Emma Hayes said last week.

“They’ve learned from the experiences of last year and I do not underestimate them.”

Since Hayes said that, she has added arguably the best player in the world right now, Pernille Harder, to her squad.

That transfer alone shows the size of the task that United have in not only winning this weekend, but in becoming one of the best teams in this league.