Calvert-Lewin commits to Everton and targets Europe with Ancelotti's Toffees 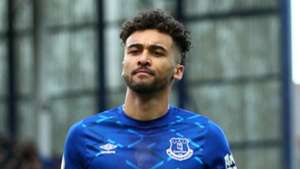 Dominic Calvert-Lewin has targeted trophies and European football with Everton after the goal-hungry striker signed a new five-year contract.

The 22-year-old said he was "very proud" to commit his long-term future to the club and vowed to keep up his recent rapid progress, having scored 15 goals in all competitions this season.

Calvert-Lewin has especially thrived since Carlo Ancelotti came in as manager in December, netting eight goals in his last 10 Premier League appearances.

He has made a strong case to be included in England's Euro 2020 plans, particularly in light of injuries to Harry Kane and Marcus Rashford.

"This is a very proud day," Calvert-Lewin told EvertonTV. "The turnaround we have had since December is fantastic and the belief in ourselves we are back up there and can compete with the best is well and truly there.

"And with a man like Carlo leading the ship it makes it easier for us to believe in the process.

"We want to be in Europe and competing in the top competitions. It would mean that bit more to win trophies here because of the journey I have been on with Everton and Evertonians."

He detailed an ambition to take his game "to that next level" and, although the Toffees have slipped slightly to 11th in the table, they would close the gap to fourth-placed Chelsea to just five points if they win at Stamford Bridge on Sunday.

With Ancelotti facing his former club, Calvert-Lewin will be out to enhance his growing reputation.

"I like to think I have shown I am ready to live up to the expectations of being Everton's number nine," he said.

"But I am well aware of how much I need to improve and how much better I can do."

Although they are 11th in the Premier League table, they are only five points behind fifth-placed United, a position that may earn them Champions League football next season.