CAS to the rescue? Chelsea's Champions League hopes hanging by a thread after Brammall Lane beating

CAS to the rescue? Chelsea's Champions League hopes hanging by a thread after Brammall Lane beating 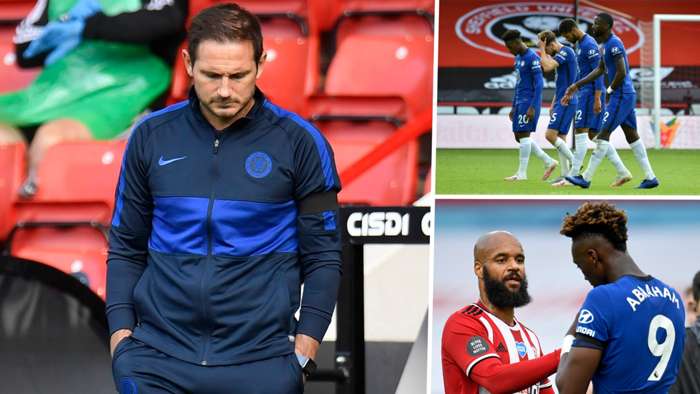 The result of Manchester City's appeal against a two-year ban from the Champions League is suddenly of great interest to Chelsea.

Sheffield United were good value for the victory and deserve plenty of plaudits for what was their first win over a top-five side this season.

However, the story of the game was undoubtedly a dreadful display from the visitors.

They defended poorly – again – but this was a collective failure. After all, Chelsea had 76 per cent possession in Sheffield – since Opta began recording such stats in 2003, no side had ever seen so much of the ball and lost.

The worrying thing was that the Blues were beaten in every facet of the game. They were not just outscored; they were outfought and outthought by a newly promoted side operating on a fraction of Chelsea's budget.

We're talking about a team that many pundits were tipping to challenge for the Premier League title next season, given the imminent arrivals of Hakim Ziyech and Timo Werner, from Ajax and RB Leipzig, respectively.

However, those two potential superstars could be playing in the Europa League next season if Chelsea aren't careful.

The worrying thing is that this result wasn't such a surprise, in light of the collapse at West Ham last week. Even in wins over Aston Villa and Crystal Palace, The Blues didn't look wholly convincing.

Now, they've conceded eight goals in their last four games, with their defensive flaws there for all to see.

Indeed, at this stage, the rest of league knows all about Chelsea's vulnerability in terms of set-pieces and counterattacks. Sheffield United boss Chris Wilder exploited both areas brilliantly.

Chelsea were 2-0 down after 33 minutes at Brammall Lane, with David McGoldrick scored his first Premier League goal of the season by converting a rebound, after Oli McBurnie had seen his initial effort on goal blocked by Kepa Arrizabalaga.

McBurnie would then score himself, nodding home unchallenged after a simple one-two down the left opened up the visiting defence.

Chelsea have now conceded more headed goals than any other club in the league this season, with 10.

McGoldrick scored another goal from close range to make it 3-0 and, for all Chelsea's possession, the final scoreline didn't flatter the hosts.

Lampard was the first to admit that, revealing afterwards that he was stunned by his side's lack of intensity.

"They were better than us, physically, in the mind and with the ball," he confessed in an interview with Sky Sports. "They were stronger than us. You feel and hear every noise and all I could hear was Sheffield United voices. They are a good team. If you come here and perform below par this is what will happen.

"I learned a lot and I won't forget that."

That was a clear warning to those who had underperformed. Such dips in concentration won't be tolerated next season, with Lampard intent on mounting a title challenge.

For now, though, the focus is on qualifying for the Champions League and Chelsea's run-in is far from easy.

They should have little trouble with already-relegated Norwich but the Blues must then face Liverpool at Anfield and Wolves at Stamford Bridge.

Lampard insisted afterwards, "Today, I'm only concerned with how we performed. I am not concerned about top four right now."

But plenty of Chelsea fans are. Their team's Champions League hopes are now hanging by a thread.

One thing is guaranteed, though: plenty of Chelsea fans will now be eagerly awaiting news of City's appeal on Monday morning.