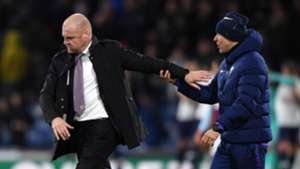 The Clarets were leading 1-0 through Chris Wood's 13th-minute goal when, according to Dyche, members of Mourinho's backroom team spoke with Moss, prompting a flurry of second-half cautions.

Burnley received no yellow cards before half-time but had five players booked in the second half, while Spurs received a single booking in the first half and finished the game with four.

Dyche told Sky Sports he felt Moss had been influenced by the visitors, saying: "There were some words at half-time going off the pitch with a few of their staff and the referee, and then the referee changed his performance I thought.

"That sometimes happens. You hope it doesn't, but I thought that second half there was everything seemed to be given for very little.

"I think we had six bookings. I haven't seen every incident but that seems bizarre to me."

The result left Burnley 10th in the table with nine games left to play, two points behind Tottenham in eighth.

Dyche's men are unbeaten in their last five Premier League matches and could yet match or better their best finish since being promoted - seventh place in 2017-18.

But Dyche called for the game's authorities to review refereeing incidents that he feels are spoiling his side's matches, pointing to a penalty claim that fell flat after striker Chris Wood was challenged in the box.

"I think the game has got to be careful at the minute and the powers that be need to take a look at what's going on," Dyche said.

"You can't not get a decision because you're trying to play the game correctly. I don't think you can do that. That's wrong. We all know that.

"So they've got to look at that, and today was a good example of that. Chris Wood, fouled in the box, definite foul - if that's anywhere else on the pitch it's given as a foul - and yet it's not, in the box today."

While Mourinho's side may have gotten the rub of the green from officials, the Spurs manager was far from happy with their performance and took particular exception with the showing off Tanguy Ndombele.