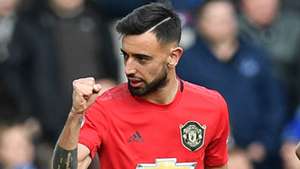 Manchester United captain Harry Maguire said that Bruno Fernandes had been instrumental in the club's recent good form, citing his "aura" as a major reason for his success.

Fernandes is part of a starry cohort of recruits, including the world's most expensive defender Maguire, under Ole Gunnar Solskjaer, and has begun repaying his manager's faith straight away.

He set up the first goal in a 2-0 win for the Red Devils in the Manchester derby by chipping a free-kick behind the unsuspecting Man City defence for Anthony Martial to slide home, thanks in part to an error by Ederson in the City goal.

Fernandes now has three assists in his last four league games in addition to two goals, and Maguire says it is evident what an impact he has had on the team.

"You can see what Bruno has brought since he has come in." the England international told Sky Sports.

"He has a big personality and he has an aura about him."

United were under the cosh for long periods of the game, with City dominating possession, 72 per cent to 28.

They failed to create many clear cut opportunities, however, and Maguire thought felt was testament to United's defensive solidity and new-found faith in themselves.

"Defensively we were solid and it should have been more than 1-0 in the first half," the former Leicester City centre-back added.

"In the second half we dug in deep, defended well as a team and deserved the three points.

"Winning games brings belief. We believe we can push on from this. With the ball we can do better.

The win, part of United's first league double over City in a decade, takes Maguire's men to fifth-place in the Premier League table, and a potential Champions League spot.

They are undefeated in their last 10 matches in all competitions and are still in with a chance of winning two cups this year.

They face LASK of Austria in the Europa League last 16 starting on March 12 and will take on the Premier League's bottom club Norwich City in the quarter-finals of the FA Cup later in the same month.