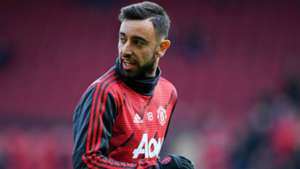 Wes Brown has credited Bruno Fernandes for Manchester United's improved form as he believes the Portugal star has lifted the team.

The 25-year-old midfielder arrived at Old Trafford in the winter transfer window from Sporting C.P. and has had an instant impact, contributing to United's upturn in form which has seen them go on a 10-game unbeaten run since their last Premier League defeat against Burnley in January.

Fernandes, who made his debut in the draw against Wolves last month, has already made seven starts in all competitions and has played a key role for Solskjaer's side as they look to close the gap on the Champions League spots.

And treble-winner Brown has been impressed with the impact the Portugal international has had.

"It's interesting when players come in in January because you don't know how they're going to do when they arrive, sometimes it takes time for them to come in and settle. But Fernandes has come in and changed the whole team," Brown told Goal.

"He is the type of player United have been missing. He wants to get on the ball and get those little dinks over the top and he has some special moves.

"By doing that he has brought a confidence to the team that wasn't there before. He has been excellent and I think the team has bounced off him coming in and they just keep improving with him in it."

Brown, who came through the ranks at United and made over 200 first-team appearances, had plenty of competition for his place during his career and he thinks the January arrivals of Fernandes and Odion Ighalo will positively impact the rest of the players in the squad.

"When you get these special players in you want to do just as good or get better than them which improves the team," Brown said speaking from the Marriott Hotels Seat of Dreams at Old Trafford (pictured below). "Everyone respects the fact that Fernandes is a quality player and that can only boost the rest of the team.

"It's what United have needed the whole season and the confidence he has brought to the team is brilliant."

There are only nine league games left this season and United are hoping to push their way into the top four, with just three points separating Solskjaer's side from fourth-placed Chelsea.

And Brown is confident his former side can secure Champions League football next season.

"I think they will manage to do it but they've had a few little opportunities to close the gap on Chelsea that they haven't taken and they will eventually run out. But it's these games near the end of the season that really count. It's definitely there for the taking."