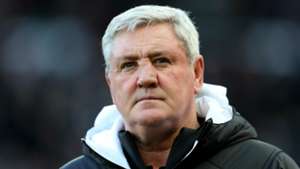 Newcastle United manager Steve Bruce is quietly confident his side will reach the "safety figure" and avoid relegation from the Premier League.

The Magpies are currently 14th in the table and five points above the bottom three with 10 games left to play.

Bruce is happy with his team's return of 32 points so far this season and has a figure in mind which he wants Newcastle to reach to preserve their top-flight status.

"Until you get to a certain figure then there's six, eight teams - whatever it is," said Bruce.

"A win can lift you two, three positions, so it's all to play for. We've all got to get to that magical figure. In the past, it's been 36 - over the last decade, it's been something like 36.

"We've got a figure in mind which we think we need, and I'm very quietly confident that we will get there."

Newcastle have failed to win in their last five Premier League outings, only taking three points in the process, but Bruce is confident they can turn it around for the business end of the season.

"We've had a difficult run and there's no denying that, but we've still given ourselves a wonderful opportunity," he added. "We've got to 32 points with 10 games to spare.

"If somebody had told me back in August that would be the case, I'd have said 'thank you very much, I'll take that'."

The majority of Newcastle's points have come at St James' Park and Bruce thinks home form will be a key factor in keeping them in the Premier League.

He said: "Of course we need to go and win a couple of games. We've got some big games coming up."

Newcastle take on Championship leaders West Brom away from home in an FA Cup fifth-round tie in midweek before visiting Southampton in the league at the weekend.

A crucial run for the Magpies comes at the end of March and start of April when Bruce's men take on relegation rivals Aston Villa, Bournemouth and West Ham.