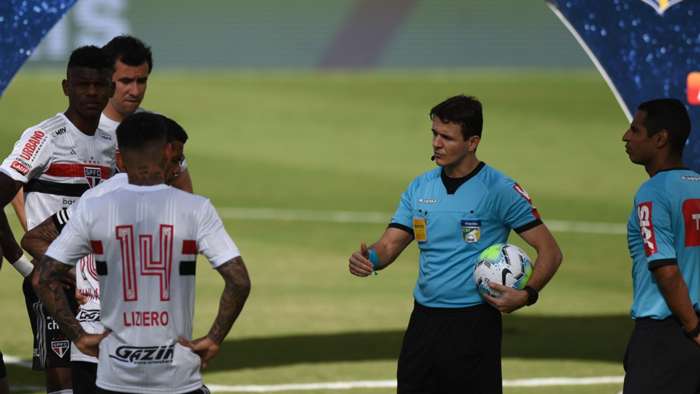 Goias had their opening game of the Campeonato Brasileiro season against Sao Paulo postponed after 10 of the club's players tested positive for COVID-19.

Tests carried out on Thursday were deemed invalid by the Brazilian Football Confederation (CBF) due to being "improperly packaged", the club said.

After receiving the results from a new round of testing undertaken on Friday less than 24 hours before kick-off, Goias sought to have the game suspended.

Players took to the field to warm-up as it remained unclear whether the matchwould go ahead, but a decision was taken just before the scheduled kick-off at 16:00 local time (19:00 GMT).

The president of the CBF's medical commission Jorge Pagura told SporTV: "As soon as it was clear that the results came out, that Goias had 10 players with a positive test, we started to contact the Goias medical department.

"Goias requested, as is its right, to do a counter-test. We awaited the results.

"In order not to lose the game we waited the maximum amount of time. Near the time to make the decision came the result of the 10 positives. At that time, health comes first."

Results of the counter-tests carried out by Goias were only received 10 minutes before kick-off and nine of the initial group of 10 were positive again, club president Marcelo Almeida told a news conference.

Sao Paulo approved of the decision not to go ahead with the game.

"Sao Paulo expresses its support and informs that it is in agreement with the decision to postpone the game this Sunday, in Goiania," the club posted on Twitter.

"There is nothing more important, at this time, than preserving health and reflecting to society the important of taking care."