Braithwaite: I’ll be at Barcelona for many years & surprise critics when I’m in the Champions League 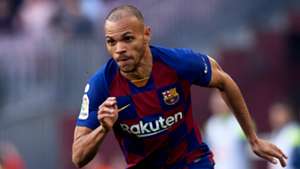 Martin Braithwaite has informed his doubters that he intends to spend "many years" at Barcelona and will make them eat their words when he is gracing Champions League competition next season.

The Denmark international striker was acquired by the Blaugrana in an emergency deal on February 20.

Those at Camp Nou were freed to complete a signing outside of the regular transfer windows after seeing Ousmane Dembele ruled out for the rest of the season through injury.

The France international will come back into contention at some stage, while Luis Suarez is closing in on a return to action after enduring fitness issues of his own.

With Barca also expected to dip back into the market over the summer, with talk of a return to Catalunya for Neymar refusing to go away, doubts have been cast over Braithwaite's future.

He may have penned a four-and-a-half-year contract, but many have suggested that he could last a matter of months before being offloaded.

Braithwaite intends to prove those critics wrong, telling Sport: "I'm here to be here for many years.

"People have their opinions, I've only heard positive stuff but if that's what people say they're going to be surprised when I'm here next season playing in the Champions League.

"So it's nice, it's a goal I can write down to surprise people because I'm going to be here for many years."

Braithwaite's value to the collective cause at Barca has been talked up by Suarez, who will be a direct rival for the 28-year-old in the near future.

"I'm just going to be me, thanks to Luis for saying this, he's an amazing guy, he received me well the first day when I came in," said Braithwaite.

"I can't wait for him to come back and play because I can learn so much from him.

"Of course I'm here to show what I can do. I'm not just here to train and go home, I have goals for myself and I'm going to achieve them."

Braithwaite has taken in two outings for Barcelona so far, with Quique Setien introducing him off the bench in La Liga meetings with Eibar and Real Madrid.