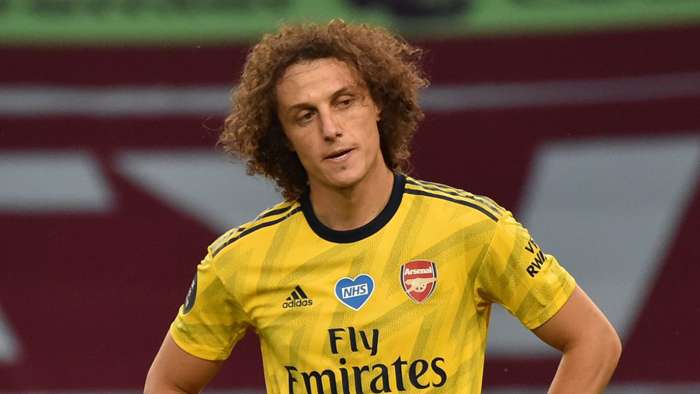 David Luiz has returned to full training following a neck injury ahead of schedule, in a boost for Arsenal and manager Mikel Arteta.

Luiz however is a popular and respected member of the first team at Arsenal, which meant his recent suffering of a neck problem, which threatened to keep him out for a period of matches, was a real blow for the Gunners.

However, the club have confirmed that the injury was a neck spasm rather than anything more serious, and Luiz is already back in full training and making good progress on his recovery.

It means he could feature in Arsenal's Premier League match this weekend, at home to London rivals West Ham United on Saturday, although Arteta may want to save Luiz and maintain his fitness.

Arsenal have a packed schedule of league games, a Carabao Cup clash with Leicester City, and the start of the Europa League soon to deal with, and will need key first-team members such as Luiz fit and available for big matches coming in quick succession.

The Gunners also provided an injury update regarding other members of the first-team squad, including long-term absentees Calum Chambers, Pablo Mari and Gabriel Martinelli.

Chambers has been out since rupturing the anterior cruciate ligament of his left knee during the home loss to Chelsea on December 29. The defender is running alongside team-mates and is back doing light training with a football; he could return to full training next month.

Mari, who sprained ankle ligaments in Arsenal's first game following the Premier League restart after the coronavirus-enforced suspension of football in England - the defeat to Manchester City on June17 - is continuing work to rehabilitate his strength and speed, and could be back in full contact action by the end of thismonth.

Martinelli is still some way from a return however. He suffered a serious knee injury in training on June 21, and after a successful operation is continuing to recover at Arsenal's London Colney training base. He will not return to full training until the very end of 2020 at the earliest.