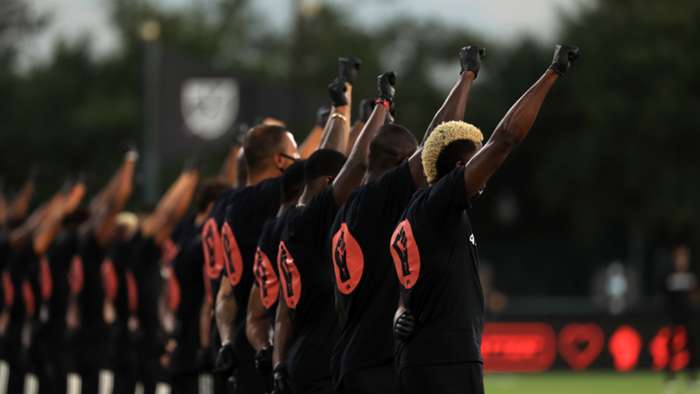 Members of the Black Players for Changegathered for a pregame statement as players stood in solidarity with the Black Lives Matter movement.

Players from each of the league's teams gathered ahead of the opener of the MLS is Back tournament, which kicked off on Wednesday in Orlando with a clash between Florida rivals Orlando City and Inter Miami.

Wearing shirts with sayings such as "Black and Proud" and "Silence is Violence", players outlined the field ahead of kickoff while the two participating teams kneeled in the center circle.

Slowly, all involved raised their fists for a moment of silence, calling back to the famous protest by TommieSmith and John Carlos at the 1968 Olympic games.

The moment of silence lasted for eight minutes and 48 seconds, symbolizing the amount of time police officer Derek Chauvin kneeled on the neck of George Floyd, sparking nationwide and worldwide protests against racism and police brutality.

MLS is the first men's professional sports league to return in the U.S., following the NWSL's return in late June.

Players in the NWSL have been participating in similar protests during the national anthem, with many players kneeling in a callback to Colin Kaepernick's protests in 2016.

Black Players for Change founded in June in the aftermath of those protests, with more than 170 MLS players involved with the newly-formed organization.

MLS will be making several gestures and nods to the Black Lives Matter movement throughout the tournament, with Wednesday's display only the first of several planned initiatives.

In addition, players will be permitted to wear a patch honoring a person of their choice featuring an inspirational message for every team's first match of the competition.

The league and the Black Players Change organization have also pledged to make a number of financial commitments to organizations fighting against racial inequality.

Wednesday was the first match of the MLS is Back tournament, a month-long competition held in Orlando.