Bigger than Beckham? Creativity required to make Messi to MLS anything less than improbable

Bigger than Beckham? Creativity required to make Messi to MLS anything less than improbable 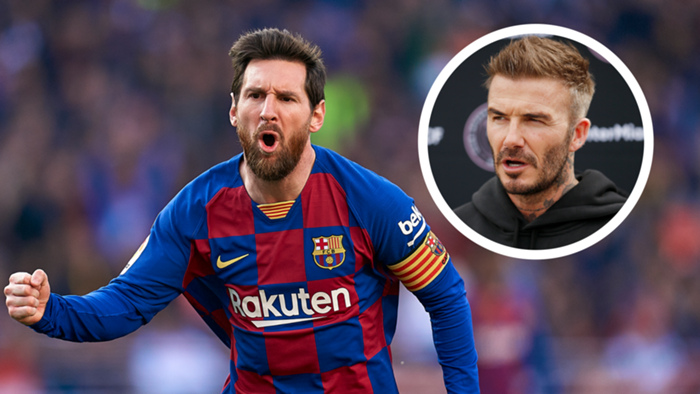 Any team that wants to sign Lionel Messi willhave to get incredibly creative.

MLS cannot truly offer either of those things.What the league does have, though, is that creativity, and this would notbe the first time that the league used it to conjure a move thatpreviously seemed impossible.

Getting Messi to MLS is virtually impossible right now. Prior to the most recent season, the Barcelona star said that his only aspiration is to keep playing at the top level. MLS, by all accounts, is notthat.

The league cannot offer that spot at the top of the European hierarchy like potential suitors Inter, Manchester City or Paris Saint-Germain.

There are only a handful of teams that could pay even that much, with Atlanta United, LAFC, the LA Galaxy, NYCFC, Toronto FC, Inter Miami and the Seattle Sounders really the only sidesthat have shown a consistent desire to spend big

But the league has been in this position before. In 2007, MLSfaced a similar scenario as one of the world's most recognisable stars, David Beckham,hit the market. And, faced with that opportunity, the league got creative.

All these years later, Beckham's signing is still lauded as a monumental moment in MLS history. Beckham was perhaps the most well-known player in the world at the time, and his decision to move to Los Angeles is still seen as a game-changer.

It is a move that began the Designated Player era, and any move for David Villa, Thierry Henry, Bastian Schweinsteiger, Wayne Rooney and, yes, even Messi, would not be possible if not for Beckham.

To bring Beckham in, MLS needed to offer something that others could not.

Part of that was selling Beckham on the American dream, the chance to be a crossover star stateside. The remainderwas offering him a look at life after his playing career ended: the chance to create his own franchise for the cut-rate price of $25 million (£18.9).

After several years of building towards that, Beckham's franchise, Inter Miami, entered the league this season. As franchise fees skyrocketed to in excess of$300 million (£227m)in 2019, it seems Beckham's business decision has already paid off.

That is not the only example. The LA Galaxy's signing of Zlatan Ibrahimovic was seen as a coup, especially since the Swedenstar signed on for a cut-rate salary for his first year. It was later revealed that the now-AC Milan strikerhad acquiredastake in AEG Sweden’s ownership of Hammarby, with AEG also being the owner of the Galaxy.

Any move for Messi would certainly be bigger than the signing of Ibrahimovic and, yes, even Beckham. At the time of his arrival, Beckham was notquite a regular at the elite levelof the game and, even at his peak, was never the player or goalscorer that Messi is.

The question is: what does Messi want? And can MLS find a way to meet whatever that request may be?

Messi has never really shown a desire to be an American star, or a star in general.He ismore reserved than his great rival Cristiano Ronaldo or Beckham, solikely would not be swayed by the promises of Hollywood or late-night talk show appearances.

He hasalso never shown a huge interest in being seen publiclyinvesting in external products. While Ronaldo has jumped into fashion, hotels and mobile apps, Messi has largely shied away from attaching his name to outside projects. He has his endorsements and trademarks,of course, but you do notsee Messi-branded products all too often.

Could Messi be tempted by offering him an ownership stake? Possibly. There isa lot of money to be made in MLS as the sport continues to grow stateside.The franchise fees indicate that, as most billionaires are notrushing to spend nine-figure sums on something with little potential for growth.

But there isdoubt that the league could even truly offer that. MLS has stated that it is done expanding, at least for the time being and, even if it wasn't, most of the major cities are now accounted for.

It is hard to see Messi deciding to come to MLS just for the rights to own a team in Phoenix, Detroit, San Diego or even Las Vegas, even if the thought of Messi becoming an icon on the Vegas strip is a humourous one to imagine.

When it comes to his on-the-field contributions, the 33-year-old may not be at the peak of his powers, but he ispretty damn close. He smashed La Liga records once again last campaign,shattering Xavi's single-season assist mark, while still netting 31 goals in all competitions.

But even a past-his-peak Messi would still be something to behold. It would be huge for the league to draw in the six-time Ballon d'Or winnerand there islittle doubt that any version of Messi would absolutely annihilate your average MLS defence.

For now, though, the thought of Messi firing hat-trick after hat-trick against MLS teams appears to be a pipedream. At the moment, it does notappear that all of the pieces involved are truly ready to align.