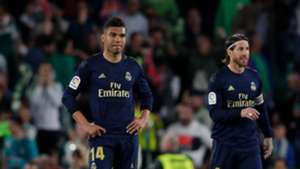 Madrid were stunned in a 2-1 defeat on Sunday , leaving them second to rivals Barcelona in the table with 11 matches remaining.

Casemiro said it could be the result that denies Madrid, who are two points adrift of Barca, the league title.

"They were superior and played better, there is no excuse, football is simple," the midfielder said, via the club's website.

"In La Liga every game is difficult. To win La Liga we have to play well in every game and we didn't play well.

"We have to keep working hard, we have not been up to the task and we have not played like we did against Barcelona.

"We are human too, but it could cost us the league title. We have to look at Eibar now."

While Karim Benzema's penalty cancelled out Sidnei's opener in the first half, Cristian Tello scored an 82nd-minute winner for Betis.

"We lacked a lot of intensity, especially in the first half. We didn't play at the pace we wanted to and we let the opponents have the ball," he said.

"We're dropping important points, but we're confident we can fight until the end.

"We're trying very hard to get back to the top of the league and today was a drop in quality from everyone.

"We still have a lot of games left to play and we're confident we're going to get that intensity back."

Manager Zinedine Zidane took responsiblity for the defeat to Betis and described the match as the worst of the season for Real.

"We didn't get anything today, and I'm to blame for it. I have to look at what happened; we're going to fight the league to the end," Zidane said post-match.

"I am with my players till the death. I am responsible here. We will analyse what happened and move on.

"We played badly. Many mistakes. We lacked everything, play, possession, aggression, our worst game of season. Didn't deserve to win. We can't be happy. We started badly, and could not correct it. I've no explanation at moment, we just lacked a bit of everything."