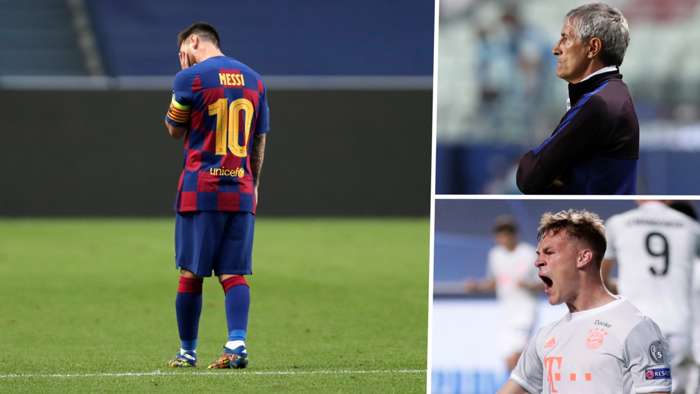 With no second leg to fall apart in because of the coronavirus pandemic, Barcelona simply started off as if this was Rome or Anfield all over again and it got worse from there.

David Alaba’s own goal levelled the scores instantly but then the relentless Bavarians scored again, and again and again and again. 8-2, the final score, and if anything it was kind on the Catalans as Bayern sailed through to the Champions League semi-finals.

The worst of this defeat wasn’t just how Barcelona kept giving up their once-prized possession; how blunt they looked in attack despite boasting the best player that ever lived; how Sergi Roberto gave the ball away so weakly for the second goal; how limply Clement Lenglet was bypassed by Thomas Muller for the fourth; how patently unfit Luis Suarez was; how Semedo was turned into stone by Alphonso Davies; how Barca’s record signing Philippe Coutinho scored two and set one up for Bayern; or any other of the multiple and obvious flaws on display.

No. The worst thing about it was how grimly and utterly predictable this was.

Unless you happen to be Arturo Vidal, quite possibly the one man on earth who thought differently.

“They have a lot of confidence but they're not playing against a Bundesliga team on Friday, they're up against Barcelona, the best team in the world,” said the Chilean on Thursday, before spending 90 minutes shovelling humble pie after humble pie down his throat. It raised eyebrows, then; it sounds impossible that he could have said such a thing now.

Barcelona became the first team to concede four goals in the first half of a Champions League knockout match since Porto, against Bayern Munich in April 2015, who shipped five.

This Barcelona team became the first to concede five goals in a European match since 1976, when they tumbled 5-4 against Nevski Sofia in the UEFA Cup.

The Barcelona team became the first to concede seven goals in any competition since 1949 against Valencia; the first to ship eight since Real Madrid won 8-2 in 1935.

It was the 7-0 aggregate defeat by Bayern in the 2013 semi-finals all over again and could have been worse, if Bayern’s finishing was sharper and their defending less poor. David Alaba turned in Jordi Alba’s cross for their first goal and Jerome Boateng nearly pulled off a remix of his 2015 tumble as Suarez sent him packing.

But Barcelona’s was the kind of defensive ineptitude and cowardice that would mark a century and send shockwaves through the game, if Barcelona hadn’t already shown it against Liverpool last season when they let in a brace from Divock Origi and another from Georginio Wijnaldum.

“If we don’t change we will not beat Napoli,” worried Lionel Messi after Barcelona threw away La Liga, despite leading Real Madrid before the coronavirus stoppage. Maybe he was hoping ineffective and hapless coach Quique Setien would be axed, but it would have made no difference. This ageing Barcelona squad is largely ready for the glue factory.

Many Barcelona players will be wishing they had gone out against the Italians, in a way it would have been kinder than having their obvious defects exploited ruthlessly by Hansi Flick’s side.

Bayern, who won 26 of their previous 27 competitive games, are the best team in Europe and proved it time and again in Lisbon. Manchester City showed Real Madrid aren’t fit to sit at Europe’s top table right now, so obviously we all knew Barcelona weren’t.

Ex-Barca midfielder Thiago Alcantara pulling the strings for Bayern and showing off with a couple of no-look passes, including one which led to Serge Gnabry’s goal, the Germans’s third, hurt the Catalans.

It was a reminder of their failures in the transfer market, as was all three of their most expensive players starting on the bench – Antoine Griezmann and Ousmane Dembele for Barcelona, and Coutinho on Bayern’s.

His introduction as a substitute late in the second half for Bayern, Barcelona’s €160m flop, their record signing, playing against them in a Champions League quarter-final, beggared belief.

The Brazilian scored two and set one up to rub salt into the Catalans' gaping wounds, which could take years to heal.