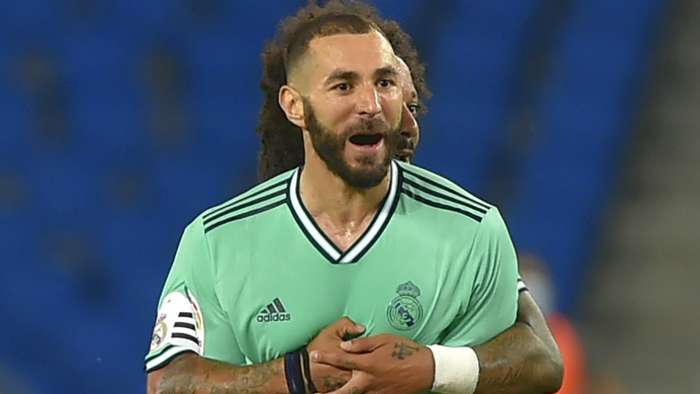 Karim Benzema and the rest of Real Madrid's squad are all deserving of this year's Ballon d'Or, according to Zinedine Zidane.

Madrid can win the Spanish top flightfor the first time in three seasonsshould they defeat Villarreal on Thursday, or if Barcelona drop points against Osasuna.

There have been suggestions that Benzemashould be in the running for this year's coveted Ballon d'Or awardand Zidane has claimed every Madrid player could be worthy of the prize.

"In football, everyone can have a say. For me, my players are the best," the Madrid boss told a press conference.

"Karim is not only this year, he has done very well for many years. The Ballon d'Or is won by only one, and everyone can comment, but for me all my players deserve it."

Los Blancos need only two points from their final two matches of the season to claim their 34th domestic crown.

Zidane believes Real Madrid's hunger to return from lockdown at their best is what has given them an advantage in the title race.

He also insistedthere is no risk of complacency creeping into his squadbefore laudingthe desire his players have shownfollowing the three-month suspension due to the coronavirus pandemic.

"No, not at all," Zidane saidwhen asked if his side already felt like champions.

"The beautiful thing we have is the energy we put in every day, day by day is what motivates us. The rest, we don't know what will happen.

"The players when they get here know the history of this club, what it is, what it wants, the ambition we always have.

"The particular thing about now is that after the confinement, when we returned to work, after staying home almost three months, the players wanted to do great things.

Though his side requires only two more points, due to their head-to-head record with Barca this term, Zidane is demanding victory against Villarreal.

"I would not want two draws. It is not what I prefer or not, it is that we are here for one thing, to think about tomorrow's game and win it," he added.