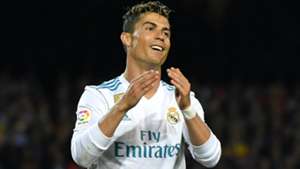 Rafael Benitez insists it is not true he tried to teach Cristiano Ronaldo how to take free-kicks while serving as head coach of Real Madrid.

Benitez was in charge at Santiago Bernabeu for an ill-fated seven months between June 2015 and January 2016 before he was replaced by Zinedine Zidane.

The former Liverpool manager struggled to win over the fans and reportedly had a difficult relationship with some of Madrid's first-team stars, most notably Ronaldo - who now plies his trade in Italy with Juventus.

Benitez is said to have encouraged the Portugal star to review footage of his own past performances in order to improve and, according to some reports, even attempted to instruct Madrid's record goalscorer on how best to shoot from dead-ball situations.

However, Benitez, now coach of Chinese Super League side Dalian Yifang, has now offered his side of the story.

"That's a lie. At no time did I tell him how he had to take them," Benitez told Marca.

"The only conversation I had with Cristiano about free-kicks was in Australia, during pre-season. I told him we had analysed, together with my goalkeeper coach, the free-kicks he took when he was at Manchester United and the trajectory of the ball in relation to the position of the wall.

"Our idea then, as Liverpool coaches, was to try to counter their [United's] free-kicks. But that's it. At no time, as coach of Madrid, did I tell CR7 how free-kicks should be taken."

Benitez also denied trying to persuade Luka Modric to stop passing the ball with the outside of his right foot, insisting he merely encouraged the 2018 Ballon d'Or winner to use his instep for short, simple passes.

"I only told him that, of course, when you have a simple pass, you have to hit it with the inside [of your foot] because then it's easier for your team-mate," Benitez said. "When I played, I also used the outside, but in 10-15-metre passes.

"Anyone who knows me knows this is a lie [that I told Modric to stop]. However, it's very easy to release lies and make them appear true."

Benitez remains reluctant to talk publicly about his short-lived spell in charge of Madrid, which ended with a 2-2 draw against Valencia at Mestalla.

"I went a long time without talking about the club. In one moment, it occurred to me to say something... and it seemed as though I couldn't say what I thought," Benitez said.

"Therefore, what I do is not talk about Madrid. I focus on the future, which is Dalian.

"We were able to sign Lucas [Vazquez], Casemiro and [Mateo] Kovacic. Two of them are still there, and at a good level, but I don't want to talk about that.

"In six months, they let me do what they let me do. For whatever reason, there wasn't interest to do more. And that's it. I don't want to say more."

Benitez was a far more popular figure during his three years in charge of Newcastle United before he moved to China.

The 59-year-old says he turned down several offers from other lucrative leagues before taking the Dalian role, as he felt the other clubs did not represent the same meaningful challenge, although he is not discounting a return to Europe.

"I'm not thinking of coming back now," he said. "We want to develop this Chinese project. Before coming here, I had offers from different places, but they didn't meet the conditions we were looking for."