Bayern star Davies: I wanted Messi's shirt but he was a little bit upset!

Bayern star Davies: I wanted Messi's shirt but he was a little bit upset! 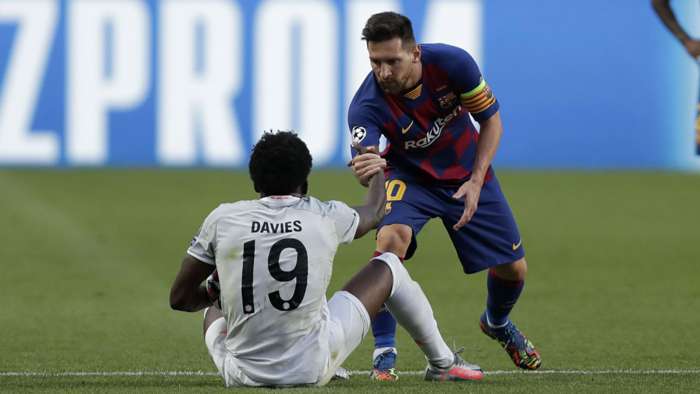 Serge Gnabry grabbed a first-half double and the prolific Robert Lewandowski nodded in his 55th goal of a staggering season to put Lyon out of their misery late on.

It followed an astonishing win over Barcelona in the quarter-final, where the only blot on a fabulous evening for Davies came when he failed to claim Messi's famous number 10 jersey as a souvenir afterwards.

"I asked for it but I think he was a little bit upset," the left-back told BT Sport. "It's OK, next time hopefully."

Messi's frustration was understandable after Barcelona finished the 2019-20 season without a trophy, casting doubt on the 33-year-old's future with the club.

Reports have suggested that Messi could be looking for a way out of Camp Nou as his contract enters its final year.

New Barcelona manager Ronald Koeman has said thathe plans to sit down and talk with Messi, expressing his hope that he can work alongside the Argentinian star for years to come.

"I don't know if I have to convince Messi or not," Koeman said on Wednesday. "You want to have the best in the world in your team, not the opposite.

"I want to work with Messi. He wins you games and, if he provides the performances he has always shown, I'll be happy if he wants to stay.

"He has a contract. I have to talk to him, because he is the captain of the team. We are going to work and talk with several players. And in the case of Messi, I hope that he will be here for many more years.

"What I talk to Messi, there are private things between player and coach. We will talk about what he thinks of Barcelona and then I will make decisions."

Koeman took over fromQuique Setien, who was sacked in the aftermath of the heavy defeat to Bayern. Technical manager Eric Abidal was also shown the door.