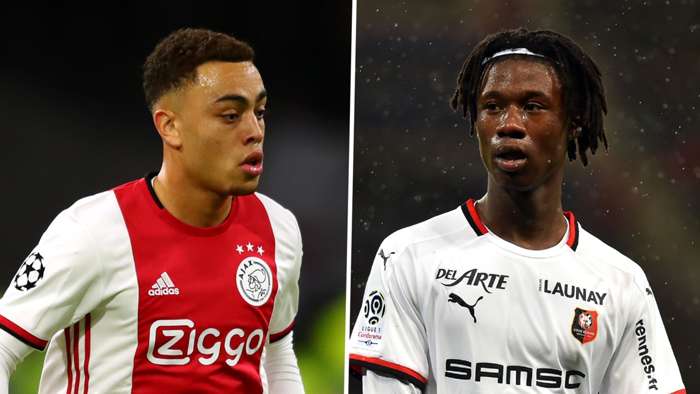 With the Bundesligafinishing earlier than Europe's major leagues, Bayern Munich have already been able to make a splash in the transfer market.

The Bavarians had pursued the 24-year-oldfor over a year, and finally got the winger they wanted as they look to findpermanent successors for Arjen Robben and Franck Ribery.

Sane joins Serge Gnabry and Kingsley Coman on Bayern's wings, meaning they can now turn their attention to other areas of the pitch.

In most years, the transfer stories around Bayern Munich revolve aroundwho they will sign and how they can strengthen.

But this summer looks set to be one where departures could matter as much as arrivals.

Bayern Munich dipped their toes in the market to see could they find a new right-back in January, but the loan of Alvaro Odriozola from Real Madrid was hugely disappointing for all parties.

Joshua Kimmich's move from full-back into midfield means that Benjamin Pavard has played that role all season, but the France international is primarily a centre-back, and as such Hansi Flick needs an extra option to compete with Pavard.

There have been a number of names linked with the Bavarians in recent months, including Arsenal's Hector Bellerin, Barcelona's Nelson Semedo and Manchester City's Joao Cancelo.

But their primary focus is on Ajax and United States defender Sergino Dest .

The 19-year-old played 35 times for Ajax in 2019-20 before the Eredivisie season was ended prematurely, with Dest's agent having confirmed that both Bayern and Barcelona were interestedin his client.

Ajax's asking price of €26 million (£24m/$30m) looks to be the main problem for Bayern at the moment, as sporting director Hasan Salihamidzic is determined to get the best value out of any deal he is involved in.

Adding another midfielder is the second priority for the German champions this summer, especially as they may need depth in the engine room if some senior players decide to leave.

Jude Bellingham was a name discussed internally, but Bayern never made a serious move for the wonderkid, allowing Borussia Dortmund to beat Manchester United to his signature .

Another young midfielder that has caught Bayern's eye is Rennes teenager Eduardo Camavinga. The 17-year-old turned many heads for his mature performances in Ligue 1, but could be one of the most in-demand prospects on the market.

Salihamidzic is likely to want to wait to see what happens with other moves elsewhere in Europe, as well as potential exits from Munich, before making a decision whether to follow through on their interest for the French teenager.

With Sane secured, the biggest transfer drama in Munich this summer will focus onwhether Thiago Alcantara and David Alaba will leave the club.

Thiago was set to sign a new deal in May, but decided at the last minute not to agree a contract extension. The Spainmidfielder has just one year left on his current deal, and decided he wants a new challenge after winning the league title every season since joining from Barcelona.

Reports in Germany indicate he would like to join Premier League champions Liverpool, but the Reds have other priorities than inmidfield and there are doubts over his age and injury history.

However, a low fee could see clubs willing to take a risk on a midfielder who is world class when fit to play.

Alaba, meanwhile, has been a huge success at centre-back under Flick, and the new Bayern head coach has repeatedly expressed his admiration for the Austriadefender.

Pep Guardiola is also a fan from his time in Bavaria,so a move to Manchester City could be a possibility, but Bayern are likely to give into his wage demands to secure him to a new deal.

Barcelona and Real Madrid also remain interested in Alaba, but financial issues caused by the coronavirus pandemic rules them both out of a move this summer. A free transfer could be possible in 2021, but that is the worst-case scenario for Bayern.

Sane will wear the No. 10 shirt next season at the Allianz Arena, replacing Philippe Coutinho,who had taken the number during his loan from Barcelona.

Bayern had a purchase option for Coutinho included withinthe deal with the Catalans, but will not activate the clause or even negotiate a fee as the Brazilian has not lived up to expectations despite scoring eight Bundesliga goals in 2019-20.

Ivan Perisic was another loan arrival in Munich, but Bayern would be more willing to sign him permanently if they could get Inter to negotiate a low transfer fee. The Croatiawinger has been an excellent squad member, but turned 31 earlier this year and is seen as a backup option.

If Thiago leaves, Bayern could decide to retain the services of either Javi Martinez or Corentin Tolisso, who are both expected to leave this summer.

Martinez was kept around as he could play in a variety of positions, but the arrival of Tanguy Kouassi on a free transfer from Paris Saint-Germain means that the club have a younger player who can cover both defence and midfield instead of the Spaniard.

Tolisso, meanwhile,has had injury issuesand has only played 15 league games over the last two seasons. The World Cup-winner was Bayern Munich's record signing in 2017, but has failed to live up to expectations and has fallen down the pecking order in midfield under Flick.

As well as the additions of Sane and Kouassi so far this summer, former Germany Under-21 international goalkeeper Alexander Nubel has arrived on a free transfer from Schalke.

It is hoped that Nubel will be the successor to Manuel Neuer at the Allianz Arena, but the young keeper is not expected to take minutes from the veteran in 2020-21.

Thiago's late-season injury meant that Leon Goretzka joined Joshua Kimmich in midfield, and that offered a glimpse of how Bayern's starting XI will look if the Spaniard leaves.

The main change to the line up will be Sane, who is set to replace Coman in the ideal XI, with Gnabry playing on the oppostewing, though the pair will likelyswitchroles during games to cause problems for opposition full-backs.

Thomas Muller broke the Bundesliga assists record in 2019-20, so is likely to keep his spot behind Robert Lewandowski, but Goretzka could be pushed forward into this role, with Michael Cuisance getting minutes beside Kimmich in midfield.

Bayern are hopeful they can keep Alaba, who should continue as a centre-back next season,with breakout star Alphonso Davies set to retain his position at left-back.

A new right-back will provide competition for Pavard, but with Bayern unlikely to spend big because of their own financial concerns, the Francedefender is likely to be first choice for the foreseeable future.