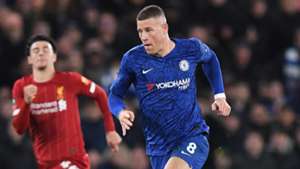 Ross Barkley has expressed his joy at finally scoring against Liverpool, with the Chelsea midfielder also likening Billy Gilmour to Jorginho after the youngster's impressive showing at Stamford Bridge on Tuesday night.

The Blues reached the FA Cup quarter-finals at the expense of Jurgen Klopp's side thanks to goals from Willian and Barkley - the latter running 40 yards from inside his own half before hammering past Adrian to make it 2-0.

And the former Everton man enjoyed his first goal against the Reds while insisting that he has now put all his previous injury woes behind him.

Barkley said: "I hadn't scored against Liverpool so it was special for me, I had only done it in the youth teams so I was glad. It was just an opportunity to drive at goal and make something happen which I like to do.

"I dropped my shoulder, Gomez shifted a bit and I had seen that the goalkeeper was blinded a bit so I took my chance and luckily it went in. Everyone knows Liverpool's strengths, every position they are strong.

"They're a top side with a top manager and they all work for each other like a proper team. You can see off the pitch that they are a really close-knit bunch. You can see with the results, they only got beat [for the first time] at the weekend, they have been so consistent all season which is what we need but this season they are doing well.

"Everyone else is going to improve. We needed that last night after two disappointing results. It was a big positive keeping a clean sheet as well, we've conceded some sloppy goals recently so to keep a clean sheet is going to be good for confidence.

"I am feeling good, always positive. I struggled with my foot for a while and since I have been free of pain I have been working hard, training well and doing what I can in games, trying to get a bit of rhythm game after game and now I am starting to feel good. I'm ready to end the season really well."

Barkley's 18-year-old team-mate Gilmour earned headlines for his display and the England midfielder was not surprised to see the Scot performing so well despite his lack of experience.

"It doesn't surprise me," he added. "I see him doing it in training every day. He doesn't have a day when he is struggling. For a young lad, he is really mature with his ability on the ball, he makes the right decision most of the time.

"He is similar to Jorginho. He is a quality player and a good addition to the squad. He recently moved into the first-team changing room with us and he's settled in really well and long may it continue.

"He is always asking questions as well which is a sign of a player that wants to improve and do well for the club. I like him and the manager and coaching staff love him as well."

This season has been one of ups and downs for Barkley who had more than two months with no games between October and January before forcing himself back into his manager's thoughts.

Barkley knows that he needs to play well for Chelsea in the final weeks of the season to stay in Gareth Southgate's England plans for Euro 2020 after being called up on the last few occasions.

He added: "It is more about how you end the season. I had a few injuries and have done well for England of late but for me it is more about the focus on doing well here with Chelsea and then England will take care of itself."