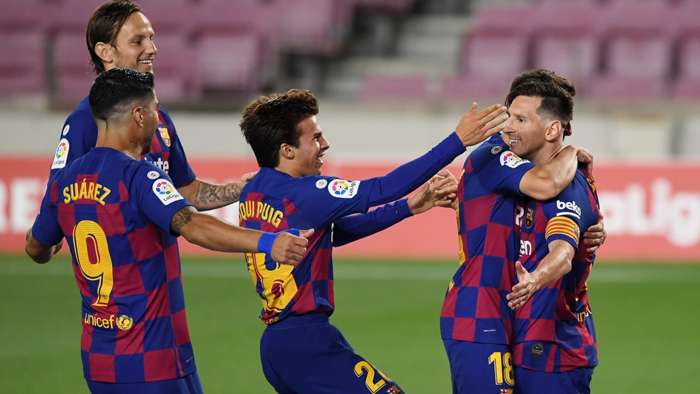 Barcelona welcome cross-city rivals Espanyol to the Camp Nou on Wednesday for a Catalan derby of great significance at both ends of the La Liga table.

Anything but a win for Quique Setien's men would all but end their title hopes, while anything but a victoryfor Los Pericos would mathematically confirm their relegation for the first time in 26 years.

Espanyol have only won one league game at the Camp Nou since 1982 and that victory came 11 years ago.

The visitors are bottom of the table and almost certain to go down, but they will be motivated to try and derail their rivals' title push by taking points off them.

Ousmane Dembele and Frenkie De Jong remain sidelined for Barcelona, while Samuel Umtiti is also out injured and Junior Firpo could be a doubt after missing Sunday's game at Villarreal with a hip problem.

Espanyol have striker Jonathan Calleri suspended after his red card in the weekend defeat to Leganes.

Barca put in one of their best performances of the season on Sunday evening recording an extremely impressive 4-1 win at Villarreal and Setien will be hoping to see more the same from his side on Wednesday.

With Antoine Griezmann playing alongside Luis Suarez in a front two and Lionel Messi just behind, the Blaugrana created a multitude of chances and the margin of victory could have been much greater than three goals.

Espanyol, in contrast, looked utterly bereft of confidence or ideas in their 1-0 home defeat to fellow strugglers Leganes and they are likely to be in for a difficult evening against their fiercest rivals.

In what is a highly one-sided market, backing the hosts to win with a -2 handicap at 11/10 (2.10) looks like the best way of investing in the Blaugrana.