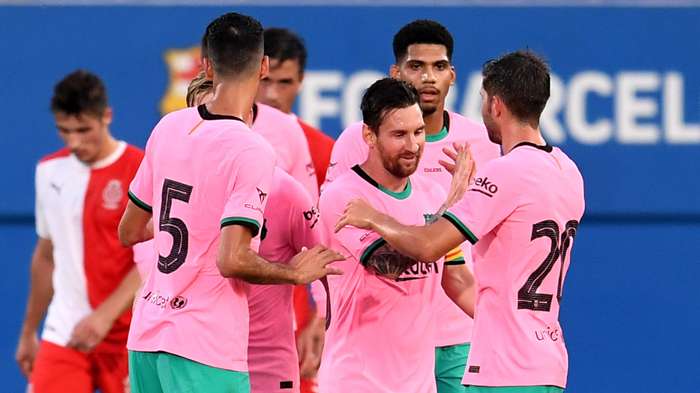 Lionel Messi did not take long to get back among the goals with Barcelona, scoring a right-footed beauty in Wednesday's friendly against Girona before later adding a second.

In an exclusiveinterview withGoal, Messi said he preferred to stay for the 2020-21 season rather thanbecome embroiled in a messy legal battle over a termination clause he looked to activate in his contract.

While Messi and his legal team asserted the right to activate the clause at season's end in August, Barcelona insisted that he had to inform them of his desire to leave in June — when the season was originally scheduled to end before the coronavirus break pushed it back.

Rather than fight it out in court the 33-year-old will stay at Barcelona, though his future is far from clear with his contract set to expire at the end of the upcoming campaign.

The strain of his off-field issues looked to have no effect on Messi on the pitch though, as he slammed home ashot from distance off the post to give his side a 2-0 lead just before half-time.

Messi would score a second five minutes after the break after his left-footed strike from range took a deflection on the way in.

Barcelona's first goal was scored byPhilippe Coutinho, who finished off a lovely team move that was sparked by Messi's delicious through ball.

Coutinho is another player whose Barcelona future is in doubt after the Brazilian returned to the club from a season-long loan at Bayern Munich.

The Bavarians turned down the chance to signCoutinho on a permanent basis and the 28-year-old could be set to stay with Barca after he appeared likely to be sold earlier in the summer.

Coutinho’s agent, Kia Joorabchian, recently ruled out a return to the Premier League for his client, who had been heavily linked with a move to Chelsea and Arsenal.

Joorabchian said that new coach Ronald Koeman insisted the Brazilian is a big part of his plans at Camp Nou.