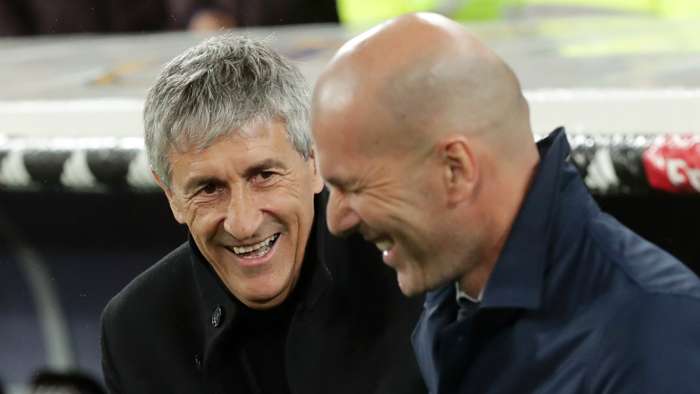 Barcelona boss Quique Setien is clinging to the hope Real Madrid will falter to allow for a late twist in the title race.

Despite holding a narrow La Liga lead when the season resumed, Barcelona have slipped four points behind their great rivals with only four rounds of games remaining.

A coronation for Zinedine Zidane's team appears inevitable, given they have won seven straight fixtures since the league's suspension ended.

But Setien is refusing to wave the white flag, as he told a press conference onTuesday: "Of course we can still win La Liga. Mathematics says it. We have to keep hope until the final day.

"We have to look at what we can do. Win, leave good feelings, make progress. And if not in this situation, everything we do is worth it for the next one."

Should Barcelona take the title battle down to the final day, that would be a small triumph in itself given the current circumstances at Camp Nou, but victory in the homederby against Espanyol on Wednesday is surely imperative.

They have the Champions League resumption to come in August, then a new La Liga season after that, and Setien wants to see signs of progress from a team who have struggled since COVID-19 caused the 2019-20 campaign to be stalled for three months.

Club president Josep Maria Bartomeu has indicated he plans to keep Setien on for at least one more year, with the coach speaking of "the circus that is football" as speculation surrounded his position.

"The club arehappy with the work we do, I focus on that," he added. "I don't value whether we win a game or lose others. I don't live daily, I work with more perspective.

"We are quite happy, as I have said on numerous occasions. Results are one thing and the feelings are another."

Setien feels his team are performing better than their results have been indicating, as he highlighted"very good moments" in the matches where Barcelona have dropped points. Three draws, alongside the four wins they have achieved since La Liga returned,have provencostly.

The Spanish tactician was cheered by Antoine Griezmann's delicious chip in Sunday's 4-1 win at Villarreal, where the Frenchman was given a more central attacking role than in previous games and thrived on the responsibility.

"He has enough ability to show his level," Setien said. "The other day there was a moment of inspiration and the players who played on the inside and the threat on the outside were closely linked.