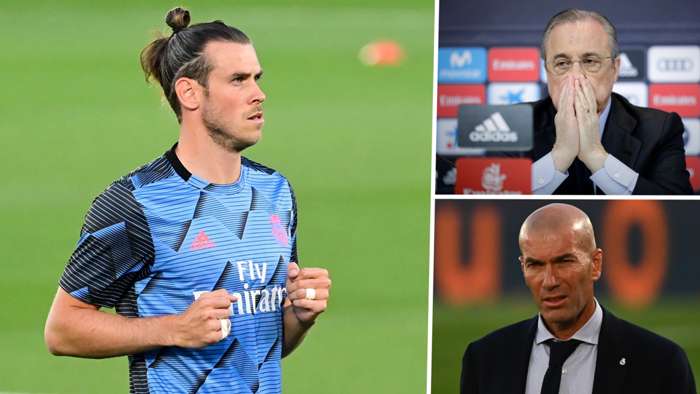 No, it was merely the sight of Gareth Bale awkwardly trying to share in his team-mates' joy, as they huddled around the trophy, that made the images from Valdebebas so cringeworthy.

The Welshman positioned himself, tellingly, right on the fringes of the group. His fist pumps were half-hearted at best; his smile forced.

He knew he'd played no part in Madrid's first title triumph since 2017.

Back then, his participation had been hindered by a succession of injuries. Even then, he still managed nine goals in 27 appearances.

This time around, though, Bale was simply surplus to requirements.

Even with injuries to MarcoAsensio and Eden Hazard, Bale saw just nine minutes of game time across two appearances for the first team between March and July.

He spent 10 of Madrid's final 12 games of the Liga season sitting on the bench.

He grew so bored that he began to amuse himself, first by pretending to be asleep during the 2-0 win over Alaves last week, before then simulating holding a pair of binoculars during Monday night's victory at Granada.

Such childish antics went down like a lead balloon at Madrid.

Even Dimitar Berbatov, an infamously lethargic character who was benched for some big games during his time at Manchester United, was astounded by Bale's behaviour.

"It is unprofessional and disrespectful to Real Madrid," the retired striker wrote in his column on Betfair earlier this week.

"I do feel his pain. I have been in his shoes of not playing and nobody is probably giving him any answers. So, you feel provoked to do those kinds of things.

"But I cannot support what he did. If I was a Real Madrid fan and saw a player disrespecting the team like that, it would be too much.

"It was a show of power. It was if he was saying: 'Play me or I'll do whatever I want.' That doesn't sit right with me.

"The only solution is for Bale to leave Real Madrid."

There seems little chance of that happening right now, though.

Madrid would clearly love to get Bale off their books, given he still has two years to run on a contract that nets him €15 million (£13.7m/$17.2m) per annum.

From the momentum Zidane returned as coach, there has been constant talk of a return to England but it is without foundation.

Even Bale's agent, Jonathan Barnett, has publicly stated that his client has little interest in joining a Premier League club at the moment.

He will only join a club that can at least match his current salary, which is precisely why he was set to move to China last summer.

When that deal fell apart, so too did Bale's relationship with Madrid.

Of course, he never had a strong rapport with Zidane, even during the Frenchman's first stint in charge.

Zidane has said there was "nothing personal" about his willingness to offload Bale at the start of the season, while Barnett has been at pains to point out that the coach has "never said anything bad" about the winger.

There is no great animosity; the pair just simply do not connect.

Florentino Perez, by contrast, always had a fondness for Bale, whom he made the most expensive player in the world in 2013.

But when the Real president re-hired Zidane, he did so knowing that it meant the end of the road for Bale.

The 31-year-old would have been allowed to leave had a Chinese Super League club been willing to pay a nominal transfer fee for the forward.

However, the deal was also scuppered by a serious knee injury to Asensio. With Hazard also having fitness issues at the time, Perez didn't feel he could further reduce Real's attacking options by offloading Bale.

Bale handled the disappointment impeccably. He has long been unfairly berated by the Spanish press for his allegedly poor command of the language, his love of golf and perceived aloofness.

However, he drew praise for his professionalism and his performances during the opening rounds of the 2019-20 campaign.

The situation deteriorated rapidly over the winter, though. Bale's representatives remained hopeful of resurrecting a move away from the Bernabeu but the club was no longer having any of it.

In his first show of petulance, Bale was pictured celebrating his country's qualification for Euro 2020 last November with a flag that read, "Wales. Golf. Madrid. In that order."

He and his compatriots found it hilarious. But nobody at the Bernabeu saw the funny side.

Ostensibly, there was still no issue between Bale and Zidane, who continued to publicly state that the squad was fully united. However, Bale has started just six games for Real since the flag was first raised.

Hardly surprising, then, that he could barely bring himself to celebrate Madrid's 34th title.

It has been claimed that Bale no longer wants to play football; that he is only motivated by cash.

However, he clearly still cares about Wales – just not Madrid. If no other club agrees to meet his wage demands, he is more than happy to stay at the Bernabeu for another two years. The attitude is, if Madrid don't want to play him, that's their problem.

It's hardly a sad situation, of course, particularly in the current economic climate: Bale is a Champions League-winning multi-millionaire.

As Barnett said last month, "He has a very nice lifestyle, so I don't see why he wouldn't probably see his career out in Madrid.

"Financially, he will want enough for the rest of his life, and his children and grandchildren. He's won nearly everything in the world except the World Cup.

“To come back and play in the Premier League would be a big thing but I don't think he wants to do that at the moment as he's quite happy to play at Real Madrid.

These are also his few remaining years as a professional, though. And he's wasting them, by wasting Real's money.